Police have commenced investigations into circumstances in which five guns were  stolen from homes of security personnel.

Police spokesperson AIGP Asan Kasingye told  journalists on Monday at police headquarters in Naguru that  the incidents happened in different parts of the country.

“On 13, July 2017, as police personnel at Alwello detach in Abim district were tending their gardens, a gun and 30 rounds of ammunition went missing from their home,”Kasingye told journalists.

He  said a one Sgt Angelos Ojok, the officer in charge of the detach who had been left to watch over it has been arrested to help in investigations.

Kasingye  said  other guns had got lost in  Apac, Sheema, Abim and Bulambuli districts from homes of security personnel including a prison warder. He added that ammunitions had also been taken by assailants.

According to Kasingye the gun belonging to a prison warder in Abim district was later recovered.

Cases of theft of guns have been on the rise of recent in various parts of the country. 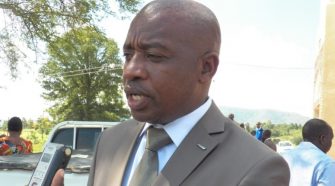