Tanzanian Bongo singer, Harmonize, says he was disappointed with Jose Chameleone’s conduct on their collaborative music project ‘Inabana’ which has recently become a subject of a controversial debate among music fans.

The song which so far has two versions featured Chameleone and Harmonize, on the first version while the other version features Harmonize and Kenzo. It is however the Chameleone version that has become more famous. Music lovers have since been pondering about what could have informed Harmonize’s decision to feature two Ugandan artistes on the same track.

When Harmonize arrived in Uganda over the weekend for a performance at Club Guvnor’s ‘Saturday Night Fever’, he commented on the ‘Inabana’ issue.

The 28-year-old, formerly signed under Diamond Platnumz’s WCB Wasafi Record said he met Chameleone earlier this year at an airport enroute to Nairobi. He says that in their interaction, Chameleome told him it was the right time to do something together.

“I was like Yo! You’re a legend bro, you did a lot for East African music and I really appreciate you,” Harmonize told reporters at Entebbe airport over the weekend.

“I gave him my number and he gave me his number. I think he sent me two or three beats. So, I discussed with my producer who was in studio. I wanted more vibe”.

Harmonize says he had already recorded ‘Inabana’ (by DJ Seven). He reached out to Chameleone and told him about the song that DJ Seven had already put together and that he (Harmonize) could talk to the DJ to pass on the rights to Chameleone.

“I sent it to him and he liked the song. That was in February at the time I was with WCB Wasafi,” the singer said, adding that when Chameleone sent the version with his verse on it, “I told him the song was good. He killed it”.

“I told him he had to contact my Manager so he could give him clearance”.

The clearance, the Bongo artiste explained, is a prerequisite for songs that feature more than one artiste. Songs that are collaborative in nature. Before a song is uploaded to digital platforms like Spotify, iTunes, Deezer, they require that clearance is got from both parties that feature on the song.

“I don’t know why he didn’t do that. I texted him asking what the plan for the song was but two times, he didn’t get back to me”.

Harmonize says this silence from Chameleone gave him the impression that he (Chameleone) perhaps did not like the song. Even when the two met at a gig in South Sudan where they performed back to back, Chameleone did not bother to approach Harmonize to talk about the issue of clearance.

“I was so disappointed”.

In June, Kenzo talked Harmonize into doing a collabo for their fans for this year. The latter would later send the same track (Inabana) to Kenzo.

“He loved the song,” Harmonize said.

It was at the time of shooting the video that Harmonize told him that he and Chameleone had collaborated on that same track but that he (Chameleone) was hesitant to release it for about six months.

“So, we (with Kenzo) shot the video and before we released it, Chameleon dropped the song”.

Nonetheless, Harmonize says the controversy surrounding the song is not a big issue to him. But it is likely that is only intended to maintain good relations with Chameleone, an artiste he considers a legend. He says both Kenzo and Chameleone are like brothers to him.

“At the end of the day, this is East Africa, they are my brothers and I like them. They are my inspiration. You guys just pick out what’s the best for you”.

The ‘Kwangwaru’ singer also commented on his recent collaboration with Ugandan songstress, Sheebah ‘Follow Me’ which he said is doing well in Tanzania. The two met during Coke Studio and its from that background that the idea of the song was born.

He says there will be more collaborations with Ugandan artistes.

“I want to see a future of Afro East music to the world. we are East African and our biggest language is Kiswahili”. 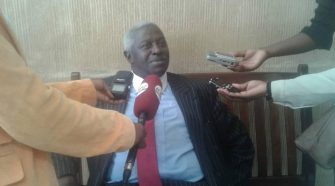