Government through the Ministry of Health has distributed motorcycles to health facilities in different local governments in a bid to strengthen efficiency in laboratory services. A total of 83 motorcycles were handed over to District Health Officers (DHOs) by the State Minister for Health in charge of General Duties Sarah Opendi on Wednesday during the annual Lab Day at the Ministry headquarters.

The motorbikes were recently procured with funding support from Global Fund and they are the third batch of motorcycles to be distributed bringing the total to over 400.

Some health facilities especially at Health Centre 3 are still faced with challenges in tests and delivery of labaratory related services. Government believes that by reducing the transportation time of lab samples, from Lower health facilities to main hubs.

Minister Opendi in her remarks cautioned heads of health facilities against mishandling the motorcycles either by failing to maintain them or using them for personal use.

“In as much as these motorcycles were procured using Global Fund resources, they are now government property and they should be used for their intended purpose,” Opendi said.

She said “they shouldn’t be used to ferry people for monetary gains” as if they are bodabodas.

According to findings from an audit conducted on 210 laboratories including 72 hubs in Uganda, none of these labs scored 50%.

The Minister said the findings are disturbing and a serious reminder to all stakeholders that there’s need to double efforts.

She emphasized the need for a multi sectoral approach towards strengthening biosafety and biosecurity programs, short of which could result into a risk of re-emerging infectious agents such as Ebola, Marburg, poor animal health management systems and epizootic spillovers.

“The Report highlights critical performance gaps and actions points and it is my desire that we take note of these together with identified non conformities and improve this performance,” she said.

At the same event, the Minister launched the National Harmonized
Biosafety Biosecurity Curriculum.

On her part, the Permanent Secretary in the Ministry of Health Dr. Diana Atwiine similarly urged health administrators at the lower level to ensure that the resources received are properly managed to produce results.

“We can never get enough. But it is hurting when we get funds from donors and we still can’t use them efficiently,” Dr. Atwiine said. 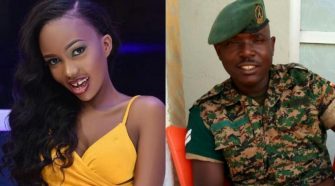