Minister of Health, Dr Jane Ruth Aceng has declared her intention to run for political office as the Woman Member of Parliament for Lira district in next year’s general elections.

The Minister announced her bid on Sunday while in Lira district. She said that her decision to run for MP is on the basis of the demands by the people of Lira and Lango sub-region in general.

“I want to appreciate the people of Lango for the love and support. Most of all, for the prayers. They prayed for me when I worked here for over 15 years. We lived among them and they loved us,” she added.

The Minister said the same people gave her a lot of blessings when she was appointed by President Yoweri Museveni as Director General of Health Services in the Ministry of Health in 2011 and later as Minister of Health.

“I’m confident that I have not let the people of Lango down. That the work I have been doing has pleased them.  That’s why they have been asking questions and encouraging me”.

“Today, I want to declare openly that I’m taking up a political position as the representative of women in Lira district and I will contest for that position”.

She says that she will run on the NRM ticket because she has worked with government and it has supported her.

Aceng, 52, has been Uganda’s Minister of Health since June 2016. Prior to that, she was Director General of Medical Services. Earlier to that, she had served as executive director of Lira Regional Referral Hospital.

She also served as a member of the board of Uganda National Medical Stores, the pharmaceutical procurement and distribution arm of the health ministry, from 2005 until 2016. 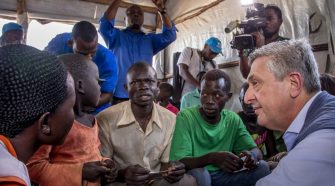