Two more confirmed Ebola cases have been reported in Kasese district, a day after Uganda’s Ministry of Health together with World Health Organization (WHO) announced an outbreak of Ebola in Uganda.

On Tuesday, the Minister of Health, Dr Jane Ruth Aceng told reporters in Kampala that the confirmed case was a 5 year old Congolese child who traveled from the DRC with his family on 9th June 2019.

The child and his family entered the country through Bwera border post and sought medical care at Kagando hospital where health workers identified Ebola as a possible cause of illness.

The boy was transferred to Bwera Ebola Treatment Unit for management. The confirmation was made today by the Uganda Virus Institute (UVRI).

However, the Minister said on Wednesday that the boy who was receiving supportive treatment at Bwera ETU died at around 9:30am (Wednesday).

“Today we have three confirmed cases. Two other people have tested positive and they are with us in the Ebola Treatment Unit of Bwera, ” the Minister told NBS Television on Wednesday afternoon.

The two include the brother of the 5-year-old boy and the grandmother.

“We are following up a total of 6 people who came in from the DRC. And that includes the grandmother who lost her husband while in DRC, the daughter, whose son has just died, the brother to the one who passed away and a maid”.

Dr Aceng also said that they are also assessing a completely new case of a person who is not from DRC, who presented with signs symptoms and a 6-moths-old baby.

“That gives us a total of 8 people. Three confirmed cases, three suspects and two cases that are yet to be defined, ” the Minister said.

She said the health teams in Bwera for a “commendable job” which she attributed to the preparations during the last 10 months.

“The treatment unit is running on course. Everything is moving on as planned. The district is working in a very streamlined manner with the partners and the centre has a very good coordination”.

On Tuesday, the Ministry of Health and WHO dispatched a Rapid Response Team to Kasese to start contact tracing and management of cases that are likely to occur.

The team will also undertake vaccination for those who have come into contact with the patient and frontline health workers considered to be at high risk.

“The District administration and local councils in the affected area have been directed to ensure that any person with Ebola signs and symptoms in the community is reported to the health workers immediately and provided with advice and testing,” WHO said in a statement Tuesday

The Ministry of Health is also setting up units in the affected district and at referral hospitals to handle cases if they occur.

Ebola virus disease is a severe illness that is spread through contact with the body fluids of a person sick with the disease (fluids such as vomit, faeces or blood).

First symptoms are similar to other diseases and thus require vigilant health and community workers, especially in areas where there is Ebola transmission, to help make diagnosis.

Symptoms can be sudden and include: Fever, Fatigue, Muscle pain, Headache and Sore throat.

People who have been in contact with someone with the disease are offered vaccine and asked to monitor their health for 21 days to ensure they do not become ill as well. 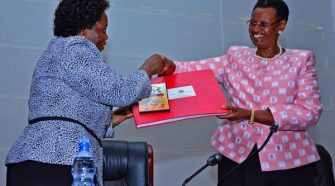