The Ministry of Health has partnered with Rotary Malaria Partners and Uganda Blood Transfusion Society (UBTS) to carry out a blood donation campaign for three months to increase the availability of blood throughout the country.

The blood donation campaign is against the background that Anaemia is one of the serious complications associated with severe malaria.

It follows a recent announcement by the Ministry that the country is experiencing a Malaria upsurge in selected districts. The upsurge was detected earlier on in a few districts in northern Uganda but it spilled over to other districts.

The Ministry of Health attributes these increased cases to a number of factors among which are; aging of nets; seasonality and climate change; heavy and intermittent rains creating breeding sites; behaviour of people staying out late; movement from low to high transmission areas and vice versa; and increase in refugees for some districts.

“This blood donation drive aims to avail blood stocks in areas where it is severely lacking,” the State Minister of Health in Charge of Primary Health Care, Dr Joyce Moriku Kaducu said in a statement.

The Regional Blood banks of Kitovu, Mbale, Mbarara, Nakasero, Gulu and Gulu will act as the main campaign centres. The nine collection centres of Hoima, Masaka, Kabale, Rukungiri, Jinja, Lira, Angal and Soroti and Mengo Rotary Blood Bank will act as designated places for the blood storage and clearing.

Currently, there are 25,000 units of blood in the country. The Ministry says the campaign intends to increase the units of blood to 50,000 by November 2019.

The public has been encouraged to donate at least one pint of blood to save three lives.

Government has also appealed to the public to sleep under a mosquito net every night, to always seek early treatment from the nearest health facility within 24 hours of onset of symptoms, and to take and complete their dosage of Malaria medicine as advised by the health workers. 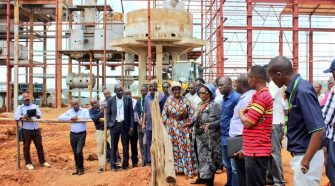