Parliament has in the latest development replaced the embattled Director Communication and Public Relations Affairs as well as Spokesperson, Chris Obore with his deputy Helen Nanteza Kawesa to serve in acting capacity.

Obore was last week locked out of office when the Sergeant at Arms changed the locker to his office on directives from the Clerk to Parliament, Jane Kibirige who sent him on ‘accumulated’ leave.

The new development was communicated by the Deputy Clerk to Parliament in Charge of Corporate Affairs, Waiswa Henry as an internal memo to staff under communication department.

“This is to inform you that the Director Communication and Public Affairs has taken his accumulated leave; during his absence I have been instructed to be in charge of the department assisted by the two Assistant Directors,” said Waiswa in the communique.

He added that, “During the interim, the Spokesperson of Parliament will be Ms. Helen Kawesa assisted by Ms. Ranny Ismail.”

Waiswa as well invited all members of staff under communication to report for a meeting on Monday to acquaint themselves with the developments.

Obore has since objected to the move by Parliament through his lawyers who have argued that the move taken by Parliament is illegal given the fact that Court had granted their client an injunction maintaining him in office as the main case is determined.

According to the Public Service Standing Orders, once a public servant does not take his or her leave in a given financial year, then the leave days are forfeited.

The Standing orders further stipulate that in the event that a public officer is sent on forced leave or interdicted or temporarily removed from office, then he or she shall be informed of the reason for such interdiction, however, the Clerk was never specific on this.

It should be noted that Helen Kawesa was replaced as Parliament Spokesperson by Obore in 2015 when he was appointed the Director Communication and Public Relations Affairs. 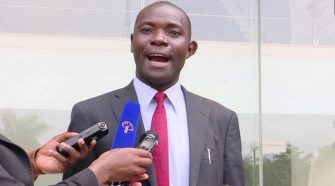