The private sector in Uganda’s tourism sector is appealing to government to issue tax waivers to mitigate the loss these businesses are facing in the wake of the Coronavirus which continues to spread fast across the globe. Many businesses in hospitality could lay off over half of their staff.

Hoteliers convened in Kampala on Monday to discuss mechanisms through which working with government they can minimize the impact that the pandemic could have on their business.

They are appealing to government to give wavers (especially taxes) to the hospitality until the situation has normalized.

“We are requesting government through Bank of Uganda to put in place some mitigating measure either by reducing the interest rates or extending grace period for hoteliers. Those are some of the things that we the hotel owners association are proposing,” Susan Muhwezi, the Chairperson of Uganda Hotel Owners Association told reporters.

“Then, we want to also create a crisis management committee that will lead the recovery efforts in tourism industry. We have always had these epidemics but there is no committee to quickly mobilize in times of emergencies,” she said.

Amos Wekesa, the proprietor of Great Lakes Safaris and Uganda Lodges says his company has had about 2,500 cancellations by Friday last week.

“I will be able to check today and see. I have been told 9 out of 10 emails coming in are cancellations, I held a meeting this morning with staff to tell them what is happening and what might happen so they can prepare themselves,” said Wekesa.

Bittencourt Phillipe, the General Manager for Sheraton Kampala Hotel says it is appropriate if the hospitality sector along with government finds a harmonized approach towards the ongoing crisis as opposed to individual businesses implementing different measures.

“And I think the subject has to be discussed with the Ministry of Labour because I know issues relating to salaries might become a problem,” he said.

Protea Hotels could lay off at least half of their employees, according to Patrick Bitature who heads the hotel chains in Uganda.

“These are extraordinary circumstances therefore we are going to lay off at least 50% of the staff and maybe it’s only for 4 weeks, maybe 8 weeks according to the situation. But we need a waiver otherwise, we will be in breach of the law,” Bitature said.

Uganda’s tourism industry is not the only one reeling from the coronavirus pandemic. It is estimated that up to 50 million jobs in the global travel and tourism sector are at risk, with travel likely to slump by a quarter this year, the World Travel and Tourism Council (WTTC) said on Friday.

WTTC arrived at this assessment by looking at the drop in international and domestic arrivals this year, plus figures related to spending and jobs.

“It has a domino effect,” said Gloria Guevara, the Council’s President and Chief Executive.

“If a cruise ship doesn’t travel and there are no passengers, then no food is being purchased for the trip and tours are not being sold.”

The tourism industry accounts for 10% of the world’s GDP and jobs.

WTTC is calling on governments to remove or simplify visas wherever possible, cut travel taxes and introduce incentives once the epidemic is under control.

It’s estimated that, once the outbreak is under control, it would take up to 10 months for the tourism sector to return to its normal levels.

“We have been reliant on foreign travel especially for tourism. The moment they (Uganda) blacklisted the first 6 countries, a lot of people that handle tourists from China, Japan, Germany, Italy lost a lot of business. It is a very tough time for tourism generally,” Wekesa said on Monday.

He says that most tourism businesses could lay off about 90 percent of the staff in a bid to cut down costs in the wake of a slowdown.

“Tourism employs youths and women who need these jobs more than anyone”.

The private sector is asking that government gives them a waver on some of the taxes since they are not earning.

“The truth is – the company will not be earning. And government which announced, for the right reasons, that foreigners should not come, should be ready to share the challenges. In the UK, they announced that interest rates would move from 0.7% to 0.4%. In Italy, all mortgage payments have been abolished”.

“Uganda too should have solutions for its businesses”.

Wekesa says the impact extends beyond just the businesses that are directly involved in travel and hospitality. He says there are many people including farmers, fuel stations, taxi cabs, food vendors among others, that will suffer losses.

Recently, ITB Berlin which is one of the biggest travel expos globally was cancelled due to coronavirus. 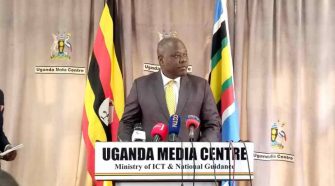