Government ministries will be required to provide an asset register, vehicle utilisation and their loan portfolios to Parliament every financial year, in a new provision of the Rules of Procedure of Parliament meant to streamline the budgeting process.

In presenting their Ministerial Policy Statements, Ministries will also be required to show the actions taken to implement the recommendations of Parliament in respect to the Report of the Auditor General of the preceding financial year.

Ministerial Policy Statements set out the performance and plans of Ministries and government departments or agencies.

Parliament, presided over by the Rt. Hon. Deputy Speaker, Jacob Ouanyah, Wednesday, 26th July 2017 continued consideration of its Rules of Procedure, also approved amendments of the Rules intended to realign them with the Public Finance Management Act, 2015.

The Committee on Rules, Privileges and Discipline proposed that Shadow Ministers submit their alternative policy statements to Parliament by the 29th day of March every year.

The Statement shall also include the annual procurement plan, annual recruitment plan, the cash flow projections; and certificate of gender and equity responsiveness; the achievements of the vote for the previous financial year; annual and three months workplans and outcomes; the objectives, outputs, targets and performance indicators of the workplans.

Hon. Nandala Mafabi (FDC, Budadiri West) said that in order to ascertain how much a Ministry is owed, the Policy Statement should also indicate their loan portfolios and domestic arrears.

“We need to add loan portfolios in the Ministry, such that we know how much the Ministry received, utilized and its standing,” said Nandala.

The Minister of Finance, Hon. David Bahati, however said that government instead presents a quarterly and annual loan portfolios arguing that the addition would not add any value.

“We already submit a loan portfolio. Of what value will this amendment add?” said Hon. Bahati.

Despite the Minister’s objections, Parliament approved the requirement for Ministries to show their loan portfolios in their Policy Statements.

Parliament deferred the consideration of amendments to the Rules of Procedure to another sitting. 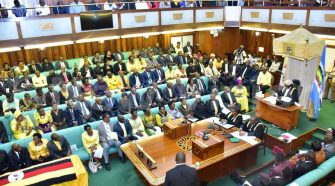