Gen Mugisha Muntu became FDC Party President on 22nd November 2012 after winning a highly competitive race between him, Hon. Nathan Nandala Mafabi who was the Leader of Opposition in Parliament and the Party’s Deputy Treasurer General and Hon. Ekanya Godfrey. This election came after the 2011 general elections and the Civic Action Activities code named Walk to Work under Activists for Change A4C that preceded. Dr Kizza Besigye informed the Party Leadership of his intentions to resign and have ample time to concentrate on Civil Disobedience – Defiance. He asked the party leadership then to prepare and elect a new leader.

His victory was contested even after the persons he had competed with had given conceding speeches. He faced the Rubaramira Ruranga Petition. Muntu held the first National Executive Committee and in his communication he brought it to the attention of NEC members that a petition had been presented to the National Chairman Late Hon. Sam Kalega Njuba. The Party agreed to set a Truth and Reconciliation Committee which was headed by Counsel Rwakafuzi. The Petitioner was given the opportunity to present his side.

Later a committee of elders was appointed to handle the committee findings. NEC discussed all these recommendations and resolved on the same (a copy of which is available online). Its true some members didn’t agree with one resolution on the term of office. Major Rubaramira Ruranga who was the Chief Petitioner defected to NRM and other members declared themselves a ” Reserve Force” meaning that they would not participate in any party activities.

Secondly, another section declared the formation of ‘Farmers’ Party’ and they went across several regions convincing the party members to join. All these issues were presented to NEC and subsequently a committee was appointed by Gen Muntu headed by Mr. Baguma Patrick to visit the Elgon Sub region on a fact finding and reconciliation mission. The efforts of this committee yielded results and thank God the process to form Farmers’ Party was aborted.

At the first National Council under Muntu’s Presidency, the Party’s Treasurer General, Hon. Jack Sabiiti and his Deputy Hon. Nathan Nandala Mafabi tendered in their resignation. Finances are the backbone of any organization, the Party could not transact business with ease without a treasurer. The Party President appointed some leaders to Act in that office.

It’s important to note that by the time Muntu came to office, the Party had sent most staff on forced leave because the party could not manage to pay them, save for three volunteers, one admin Patricia, the office attendant and the security guard. Mr Bakandonda Whycliff had retired and at the same time the party was under financial crisis. Today the Party Secretariat is fully functioning with more than twelve fully paid staf members with a Chief Administrative Officer – CAO.

Muntu’s first task was to create an atmosphere for everyone in the efforts on building party cohesion and or unity. This indeed happened, all those that had wanted to form farmers party came back including but not limited to all those who had declared themselves a reserve force! They came back and participated in the election of party structures and we are all moving together as one Uganda.

This serves as background information before I unveil successes under Gen Mugisha Muntu, and challenges thereafter. One Uganda 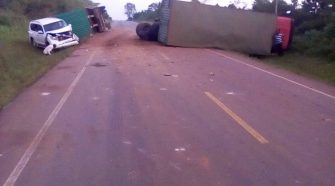