Huawei founder and CEO, Ren Zhengfei has expressed confidence in the company’s business and capacity, saying the company had been preparing in anticipation of situations as of now, and it is well-prepared.

Huawei, the world’s largest maker of telecommunications network equipment, is a leader in 5G technology. It has been trying to win contracts to build a global network that would make the internet much faster.

U.S President, Donald Trump declared a “national emergency” that enabled him to blacklist companies seen as “an unacceptable risk to the national security of the United States”.

However, Ren has maintained his company would not share secret user information. Huawei denies it is controlled by Beijing. The company also says it does not work with the Chinese government, an assertion U.S Secretary of State, Mike Pompeo dismisses.

“We will certainly be able to continue serving our customers. Our production capacity is huge, and adding Huawei to the Entity List won’t have a huge impact on us. We are making progress in bidding worldwide,” Ren said.

The preparation he mentioned includes the company’s huge R&D investment and contingency plan. According to the 2018 EU R&D Investment Scoreboard, Huawei ranks fifth, with steady growth in its R&D investment.

Huawei has a consistent Business Continuity Management System which has been certified by dozens of neutral third parties in Europe. The company has also been vigorously integrating BCMS into it global suppliers’ obligation.

Ren conceded that he expected Huawei’s growth to slow down, but expressed confidence in the company’s future prospects.

“In the first quarter of this year, our revenue grew 39% over the same period last year. This rate decreased to 25% in April, and may continue decreasing towards the end of this year. But the U.S ban will not lead to negative growth or harm the development of our industry.”

The leaders of Britain, Germany, France, Belgium and the Netherlands said that their governments will not follow suit to ban Huawei from involvement in their networks.

French President Emmanuel Macron said it was not the aim of France to block Huawei, nor to launch any form of technological war. German Chancellor Angela Merkel said companies could participate in expanding Germany’s 5G network if they met established safety criteria.

“The device in people’s hands are completely unaffected by what’s happening in the US. For owners of Huawei handsets it will be business as usual,” Schloss said.

“We remain positive, but we are preparing for various eventualities. We are stockpiling components and have been working with our supply-chain partners for some time,” he added.

Speaking to China’s state media on Tuesday, Ren said the U.S was underestimating Huawei, the world’s biggest manufacturer of telecommunications equipment and its second-biggest smartphone maker.

“The current practice of US politicians underestimates our strength,” Ren said in an interview with state broadcaster CCTV. 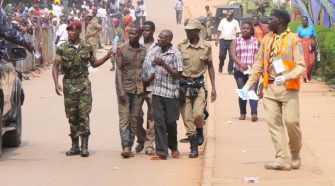