Security Minister, Gen Elly Tumwine has Tuesday told the Parliamentary Committee on Rules, Privileges and Discipline that he did not attack Dokolo legislator, Cecilia Ogwal as alleged, but instead drew her attention to a painting he made on how mosquitoes are killing Ugandans and how the challenge is handled elsewhere.

Ogwal claims that she was confronted by Tumwine while in the parliamentary lobby about a week ago following her allegations in the House that he (Tumwine) had pulled a gun on her in the Seventh Parliament.

It was also alleged that the military general made statements that belittled the powers of Parliament and the Speaker.

“Gen Tumwine got out of the House and found me seated by the pigeon-hole lobby with colleagues. He came to me with a lot of anger saying ‘you are a liar! I never pulled a pistol on you,” Cecilia Ogwal told the same committee last week.

Ogwal told the Committee that the alleged incident of Tumwine pulling a gun on her during the Seventh Parliament followed a heated debate in the House on the subject of indoor spraying of DDT.

“He was promoting the use of DDT but we were opposing it because we wanted to protect organic farming. So when he felt that our arguments were too strong for him, his response was to hold the gun at me,” Cecilia Ogwal said.

Now, while appearing before the same committee today Tuesday chaired by MP Clement Ongalo-Obote, Tumwine denied all the accusations by Ogwal, describing them as “false, malicious, taken out of context” and meant to demean his character and discipline and that of the UPDF in general, for which he has worked for, for 38 years.

“I only invited her to see a painting I made on how mosquitoes are killing Ugandans. It is not easy to serve for 33 years in parliament. It takes discipline and action. Not anybody can achieve that. These allegations are a threat to peace and security and I implore Parliament to take interest for the good of the country,” said Tumwine on Tuesday.

He said it a normal practice at Parliament for legislators to continue with discussions on what transpired during the plenary even outside the house. He says it was not the first time he engaged Cecilia Ogwal on different issues from the area she alleges he attacked her.

MP Nuwagaba had earlier reminded Tumwine of a statement he made on the floor of Parliament that he had been previously sent out of Parliament three times. He tasked him to explain the cause of all his suspensions.

“For the first time it was dressing. I don’t fear to set a precedent like some people who fear to do so. I’m a designer and designers set precedents, they try new things. That time I was protesting against putting on a tie,” said Tumwine.

He explained that for the second time, he was suspended for putting on full colours of the National Flag from top to bottom something not allowed by the rules.

“So, because I had not put on a tie, I was sent out and I accepted to move out. I later convinced the Committee on Rules to change the rules,” he said.

Tumwine has further refuted MP Katusabe’s allegations of him demeaning powers of the Speaker and Parliament saying he (Katusabe) harbours intentions of tarnishing his name. He vowed to expose and fight all his intentions. 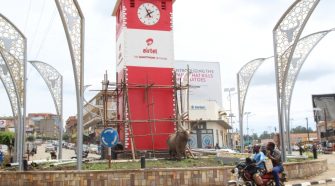