The Miss Uganda Foundation chief executive, Brenda Nanyonjo has in what seems to be a veiled jab at socialite Zari Hassan, said the title ‘Mama’ is one that every mother ought to be proud of.

Social media has been buzzing following an ugly incident that occurred last week during the crowning ceremony for the new Miss Uganda 2019. The ceremony held at Kampala Sheraton Hotel was also attended by the reigning Miss World, Vanessa Ponce.

However, an unprecedented occurrence between Zari who was judge and the emcee of the night Anita Fabiola ended up shifting attention from the main event.

The two ladies got into a verbal ‘fight’ on stage stemming from Zari’s insistence that Fabiola opens the envelope that contained the names of the top three (beauty queens) from the 2019 contest. The South African based Ugandan entrepreneur and ex-wife to Tanzanian music star Diamond Platnumz said she could not do Admin work (opening the envelope).

The envelope had been handed to Zari by Miss Uganda Foundation CEO, Brenda Nanyonjo.

Fabiola had asked Zari: “Mama, are you going to do us the honours?”

But Zari wouldn’t open the envelope. Instead she told Fabiola “Girl, you are supposed to do the Admin work here”. She then repeatedly shoved the envelope to Fabiola’s belly.

Many have since attributed Zari’s mean behavior towards Fabiola to the ‘Mama’ tag that she addressed her with during the event, which could have probably rubbed the socialite the wrong way.

On Wednesday, Nanyonjo who attended the premiere of the ‘Just Comedy Uganda’ show at Kingdom Kampala said she personally would not take offence in being labeled Mama.

“I’m Mama and I’m proud of it,” Nanyonjo said when comedian Ehmah Napoleone asked her about the ugly incident.

“I don’t think it should be a problem. Because I for one, even before I got my own biological child, I was mentoring so many young women in Uganda. So even if someone called me Mama even before princess Zara, it would not bother”.

She added that “When you are a mother, and someone accords you that respect, I think it’s something to be proud. Not to be upset”.

Despite her efforts to dodge the question, Napoleone stuck it to her to say how she felt in the heat of the moment (the exchange between Zari and Fabiola).

And she was honest. She said it felt bad, but was quick to add “it was a none issue”.

“It felt bad but I chose to ignore it because it is a none issue. It was not about a specific person at that time but the new queen that was being crowned. That’s why I have not given it attention”. 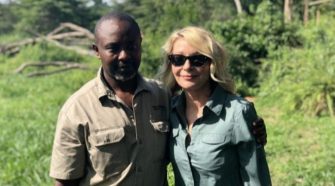 Kanungu: Ex-Convict Charged with Kidnap of American Tourist and Guide, Police Say He Was “Highly Involved”