Justice and Constitutional Affairs Minister, Maj Gen Kahinda Otafiire has said the latest conduct of academic researcher, Dr Stella Nyanzi when she stripped off and exposed her breasts in court, raises doubts as to whether she is okay.

The Minister said this on Tuesday while addressing a news conference. He was making a statement on the incident that occurs Friday at Buganda road court during her sentence.

The proceedings presided over by Magistrate Gladys Kamasanyu turned dramatic when Nyanzi who was following the events through a video feed went wild and started uttering abusive words to court. She later raised her browse, undid her bra and exposed her breasts to the court as she swang them.

Kamasanyi had a day earlier convicted Nyanzi of cyber harassment. On Friday, Nyanzi was sentenced to 18 months in prison, but she will only serve 9 months having served half the sentence already.

When Minister Otafiire was asked by reporters to comment on the act of stripping by Nyanzi, he said it is unusual for women from Buganda to expose their breasts in public. This, Otafiire said, raises questions as to whether Nyanzi (a Muganda) is in her rights senses.

“When you see a Muganda lady who has mature children behaving the way she is behaving, I think it is time for second thoughts. Whether Nyanzi is actually okay”.

He said Nyanzi’s behaviour calls for further action to probe into what her real problem is.

“I don’t want to speculate but I think some further action should be done to investigate her real problem”.

“As to whether we shall take action against her, we shall leave that to those concerned with ethics and integrity,” the Minister said.

This isn’t the first time Dr Stella Nyanzi is stripping in public. In 2016, while a researcher at Makerere University, she stripped naked before journalists in protest of what she called an unfair dismissal by the head of the Makerere Institute of Social Research (MISRL), Prof Mahmood Mamdani.

The incident sparked outrage among the public and religious leaders with many arguing Nyanzi had abused the reputation of the academia and the dignity of women. 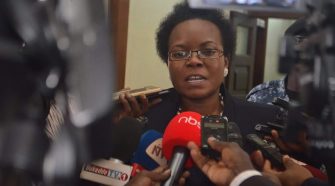 Namuganza Says Kadaga’s Installation of Chief Was Disrespectful to Museveni