In January last year, former Blu*3 singer, Jackie Chandiru opened up on her addiction to prescription drugs revealing how she struggled with no appetite for anything else and how the addiction cost her marriage.

She then embarked on a rebranding phase, released a new song and stepped up her online presence. Her fans were psyched up about the revival of a songstress that was once a music powerhouse not just in Uganda but East Africa. There were many expectations.

However, the media would soon report that Chandiru had again relapsed.

On Wednesday, Chandiru who is in currently in Nairobi spoke about what caused her relapse and why she took down her social media pages. She says judgment from people on social media as well as the media traumatized her and she felt she needed a break.

“Social media can make you or break you. So, when I came out and spoke about my problem, people took this foundation of my problem and they built all these stories about it,” Chandiru said while speaking to Capital FM on Wednesday.

“I developed anger and went off social media. I wanted nothing to do with anyone”.

She later traveled, got her treatment and spoke to professionals. She says she’s fully recovered now.

The ‘Gold Digger’ singer admitted that she later realized that at the time she spoke about her troubles, in January last year, she was not out of the woods yet (regarding recovery).

“Some things happened at the time and they triggered off not only 20 percent but 100 percent. I even thought about changing my name to Nalumansi something. I didn’t want anything to remind me of that time,” she confessed.

She says she has since let go of everything.

“I realized I was letting this thing tag me down”.

The self-proclaimed ‘Queen of the Nile’ has experiences about three relapses since then, she revealed.

To others struggling with drugs and other addictions, Chandiru says healing begins with admitting there’s a problem and facing it head-on.

“It’s about facing your phobia. Because every time you take something, you are trying to run away from something you don’t wanna face or hear or something you are scared of. For an addict, it’s very hard to accept that what they are doing is wrong. That’s why they do it in hiding”.

“They must face it, they must accept they are not the only ones going through that. Plus, they need God, because addiction is a devil 150 percent”.

Chandiru has since released ‘Quarantine’ and she has a new song titled ‘The One’ which she did with Kenyan singer, Arrow Bwoy. 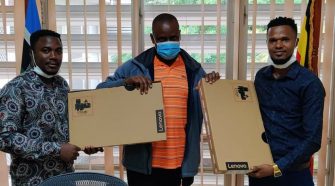