President Yoweri Museveni has professed his admiration of his counterpart Donald Trump of the United States, saying there was nothing wrong with Trump frankly speaking to Africa about the continent’s weaknesses that only Africans can resolve.

The President made the remarks during the address to the East African Legislative Assembly that is holding their session in Uganda.

Museveni said; “I love Donald Trump because he highlights Africa’s weaknesses frankly. Africans need to solve their problems and be strong. Africans are weak and you can’t survive if you’re weak. For Africa to be strong, we need integration so that we can be able to survive and act together. Integration is about strategic security, fraternity, and prosperity.”

Museveni’s remarks follow reports from the international media in which Trump was quoted in a January 12, 2018, meeting with representatives from Congress to discuss a bipartisan immigration deal.

In the meeting, Trump protested the proposal to protect immigrants from Haiti, El Salvador and African countries, with Trump reportedly saying, “Why are we having all these people from shithole countries come here?”

According to people familiar with the meeting, Trump added that the U.S. should bring in more immigrants from countries, like Norway, before saying, “Why do we need more Haitians? Take them out.”

The meeting in the U.S. followed a pronouncement on 5th September, 2017, when United States Attorney General Jeff Sessions announced that President Trump would be rescinding the Obama-era DACA program, which protects undocumented immigrants brought to the United States as children, known as Dreamers, from deportation.
Trump’s remarks were met with fury from across the globe with the African Union demanding an apology from Trump.

However, Museveni didn’t find the need for Trump to apologise, saying that it was time Africa admitted being weak and should devise means of how to make the continent strong on global scene.

“In the world, you can’t survive when you are not strong. If you aren’t strong and somebody tells you that you are weak, I love that person because he is doing my work. I have been telling Africans these things, but from another angle,” Museveni said.

President Museveni also lashed out at the EALA members for engaging in meaningless fights over speakership calling on them to work for the prosperity of the people of the East African Community as well integration.

The President called on EALA members to stop squabbles and work for integration and prosperity of the East African Community. 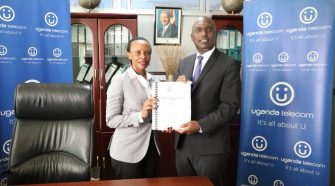