Renowned Afro Pop musician, Jose Chameleone has said he has never supported President Yoweri Museveni’s NRM party, claiming the party only solicited his services like any other person.

Chameleone said this Wednesday at an event in Nsambya, Kampala where he also officially declared his affiliation to the opposition Democratic Party (DP). The DP was launching its recruitment drive, an event that took place at the Nsambya Youth Sharing Hall.

Joseph Mayanja (Jose Chameleone) has come to been known as a supporter of President Museveni and was among the group of musicians who recorded a song praising NRM’s achievements and campaigning for Museveni during the 2016 elections.

However, many were recently shocked when he announced that he would join DP instead. He said this after announcing his interest in running for the Kampala Mayoral seat in the forthcoming 2021 general elections.

On Wednesday, the singer told DP supporters that he has never supported the NRM.

“I want to assure you that I have never been an NRM supporter. But I only worked for NRM the same way others went there to decorate or print T-shirts or those who did catering for NRM,” he explained.

“Please allow us, those that God have granted the opportunity, to fight this struggle collectively. For truth and justice”.

He added that it was for the support that his fans have given him over the years that President Museveni’s camp considered associating with him as a performer.

“I went there because of that base that I had. He called me so I could get on his chariot and we move it further”.

He says he is primarily a musician, a career that spans over two decades and that in the course of his career, he has sang at different events for different people. It is in this same light that he sang at NRM events, Chameleone says.

The ‘Wale Wale’ singer and multiple award winner wore a red beret which has come to be associated with the ‘People Power’ political group led by his fellow musician and legislator, Bobi Wine.

“I am DP. But I believe that DP and People Power have the same objectives,” Chameleone later told NBS TV.

“DP is a registered political party, then People Power is part of the energy. It is a slogan on which we ride,” he added.

At the same event, Chameleone’s mother revealed that their family including the singer’s grand parents have always been ardent DP supporters.

On Tuesday, DP President General, Norbert Mao had told reporters that the singer was “returning home”.

“People like Chameleone and other key figures who are joining us cannot be put on the bench. We have to allocate them numbers for they are strikers,” Mao said during a news conference. 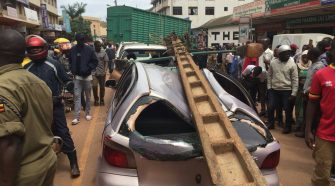