Mugisha Muntu, the former President of FDC has reiterated that his decision to leave the party had nothing to do with the defeat he suffered during the party Presidential elections.

He instead said that his departure from FDC was due to the infighting and the parallel strategies within the party.

Many political actors especially within the FDC have come out to tie Muntu’s decision to the fact that he lost the Presidential sit to Patrick Amuriat last year. Some actually termed him as a bad loser who could not work within the party to reconcile the differences that existed.

On Thursday, during a press conference where Muntu announced he was forming a new political party, journalists asked him whether he was different from President Museveni since he has decided to leave the party after losing an election the very thing Museveni did which led to the bush war.

Muntu said that it would be unfair to compare him with Museveni noting that he has lost elections on several occasions within the party but remained working for its advancement.

Muntu, 60, said that he was never that lucky as a party President to enjoy any support from Besigye. Twice, he lost to Besigye but still conceded and stayed in the party, he stressed.

“I don’t know how many times I should say this. Hon. Patrick Amuriat is the legitimate President of the FDC. I told him that if there is any support he wants from me, I would give it to him in an honest way,” Muntu emphasized.

He added, “If we were bitter losers, we would be raising dust all over, so I didn’t leave FDC because I lost”.

“In 2015, I was the party President and in the Working Committee I told the collegues that we have fought each us into a state of paralysis and we couldn’t move on.”

Furthermore, Muntu said that had he won the elections and become FDC President, there would still be fighting since the strategy he was advancing was parallel to that pushed by other leaders in the party.

He noted that he had previously suggested to the leaders that they would need to resolve the contradictions within and if they couldn’t then they would separate in a more mature way.

“I am not leaving FDC because I lost but because of internal fights; I have never feared in my life what people think because it’s not them who make judgments.”

“If I think what I am trying to do is right, it will work, come rain, come shine.We cannot fear to do what we believe is right because we don’t want to be judged that we have left because we lost”.

According to the former army commander, FDC’s current President, Patrick Amuriat is in a better position now to implement whatever strategy he desires with no opposition. He however advised FDC to rebrand the party around the ideology and policy positions rather than pushing for mere change. 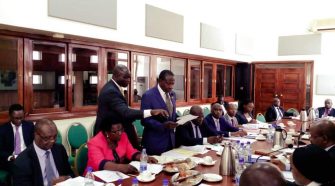