It seems the rift at the National Resistance Movement (NRM) Secretariat between the Secretary General, Justine Kasule Lumuba and the party’s Chairperson of the Electoral Chairperson, Dr Tanga Odoi, is far from ending.

While addressing journalists at the party’s headquarters on June 7, last year, Lumumba, without diving into the cause of the division, blamed President Yoweri Museveni for failing to find a lasting solution to her bickering with Odoi. She said the rift was then, still ongoing despite silence in the media.

‘’The rift between Lumumba and Dr Odoi has not yet ended. Nevertheless, I call on the national Chairman, who is President Museveni, to come and solve this issue because equally as Lumumba, I am tired of this,’’ she said in December.

On Wednesday, the NRM party, unveiled their 2021 Political Roadmap in preparation for the next general elections. Ordinarily, one would have expected the Party’s Electoral Commission, given the fact that it is a key stakeholder in the process, to have taken part in the draft of the roadmap, as well as the Chairperson or a representative from the Commission, to be present.

However, no semblance of this was witnessed as Lumumba and other CEC members read out the roadmap to the journalists at the party’s headquarters on Wednesday in Kampala.

No official from the party’s electoral body was present, which raised many questions from the press including whether, last year’s bickering between the two leaders has persisted.

When asked by journalists, Lumumba said there was no cause for alarm, saying that she will write to Dr Tanga Odoi and inform him of what had transpired.

‘’The duty of the Secretary General is to effect resolutions by the different party committees including National Conference, National Executive Council, Central Executive Council and any specila assignment by the national Chairperson or CEC,’’ she said.

‘’As we speak now, the national Chairman, tasked me and CEC members to come and unveil this roadmap to the public. So, it is my responsibility after here to write to the Chairperson Electoral Commission and inform him about what is contained in the roadmap and ask him to start on the needed preparations,’’ she added.

When SoftPower News contacted Tanga Odoi on phone for a comment on the matter, he said he did not know about the released roadmap.

‘’I am on my way to Tororo for a burial but I have also just heard that they have launched a roadmap, I have no idea about it,’’ he said.

In 2018, Odoi described Lumumba as “a good mobiliser and good dancer who is able to mobilize for votes but a bad administrator”. 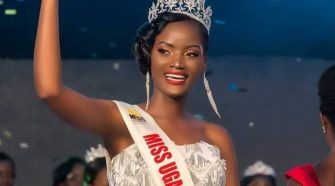