Suspended Makerere University lecturer and Chairman of the academic staff Association (MUASA), Dr Deus Kamunyu Muhwezi has said he will not handover his office as instructed by the Vice Chancellor, arguing his suspension was vague and unlawful.

Last week, the Makerere Vice Chancellor, Prof Barnabas Nawangwe wrote to Dr Muhwezi suspending him with immediate effect for persistently engaging in acts of misconduct and incitement with the intent to cause disobedience and strikes.

The VC ordered the MUASA Chairman to handover his office as well as stay away from the campus (where he resides) during the suspension.

But on Saturday, Dr Muhwezi told NTV that he does not intend to handover his office.

“In the interim, and committed to the rule of law, I have decided to reject the suspension. I will not allow that lawlessly, I am handled in the face of the public and the staff I represent,” he said.

“And on the basis of that, I’m not going to handover my office,” Dr Kamunyu Muhwezi said.

In a separate statement, Muhwezi said he had anticipated the move to suspend him since April of 2018 when he was first warned to cease and desist from talking (as a Chairman of MUASA), about land problems, corruption and the undermining of employment systems by the Chairman Appointments Board at Makerere University.

“This kick started the fabrications against me as a person to this end,” he said.

He terms the letter of suspension authored by the Vice Chancellor as “very vague, harsh, in bad faith and against all laws of this country”.

“It even undermines my rights as a citizen to have access to my official home, public buildings and related services. The letter unfairly portrays me as a criminal, but you know me better than that”.

The MUASA Chairman said that his suspension should be an indicator that room for intellectual debate and dissenting views at Makerere University is shrinking.

“Intellectuals debate and disagree to generate knowledge and progress. When this is branded indiscipline, knowledge creation inevitably dies and the end of human dignity and achievement beckons. Let universities remain universities and allow robust debates and disagreements to freely ensue,” he said. 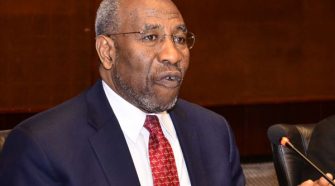 Govt to Account to Public Next Week, Rugunda Says Manifesto Implementation at 38%