The 45-year-old former warlord who has been nicknamed ‘The Terminator’ has been charged with overseeing the slaughter of civilians by his soldiers in the Democratic Republic of Congo’s volatile, mineral-rich Ituri region in 2002 and 2003.

His sentence will be determined at a later hearing.

Ntaganda is one of five Congolese rebel leaders brought before the ICC, which was set up in 2002 as an independent international body to prosecute those accused of the world’s worst crimes.

He was also responsible for the rape and sexual slavery of underage girls and for recruiting troops under the age of 15, and personally killed a Roman Catholic priest, the court said.

Some of the campaigners for justice have already welcomed the ruling by the ICC.

“We hope that today’s verdict provides some consolation to the thousands affected by his grotesque crimes [and] paves the way for them to finally obtain a measure of justice [and] reparations,” Amnesty International said on Twitter.

The prosecution said Ntaganda was central to the planning and operations for the Union of Congolese Patriots rebels and its military wing, the Patriotic Forces for the Liberation of Congo, which killed at least 800 people as it fought rival militias in Ituri.

Judge Fremr said Ntaganda was guilty as a direct perpetrator or a co-perpetrator of murders, rapes of men and women, a massacre in a banana field behind a building called The Paradiso and of enlisting and using child soldiers.

“The bodies of those killed — men, women and children and babies — were found in the banana field over the next days,” Associated Press quoted the judge as having said.

In March 2013, Ntaganda surrendered to the U.S embassy in Rwanda and asked that he is taken to the ICC. Trial began in 2015 with over 2,000 victims cleared to take part in the process. He is the first individual to voluntarily surrender to the ICC.

The accused has previously told court he is a soldier not a criminal. 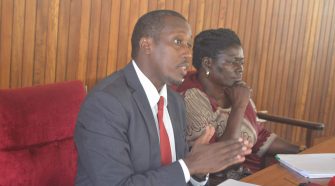 Muhakanizi in Fresh Row with MPs Over “Arrogant” Conduct