The court ruled that the time since Ntaganda turned himself in, in March 2013, will be deducted from the sentence.

Ntaganda’s individual sentences for the crimes committed were read out in order of severity and in total amounted to more than 200 years of imprisonment.

However, in a case with multiple crimes committed, if a life sentence is not imposed, the maximum joint sentence can only be the offender’s longest individual sentence, which for Ntaganda was 30 years.

Ntaganda, 45, was found guilty in July this year of the acts committed when he was military operations chief at the Union of Congolese Patriots (UPC) militia in the mineral-rich Ituri region of the DRC located in the east Democratic Republic of Congo in 2002-2003.

He was kidnapped as a child and groomed to be a soldier. During the trial, his lawyers had asked that the court treats him not as a brutal warlord but a victim of circumstances borne of a conflict that claimed thousands of lives.

In the said conflict, civilians were murdered, women and young girls were raped while children under the age of 15 were conscripted and used to fight as rebels.

However, the prosecutors argued that Ntaganda’s recruitment as a child was no excuse for ruthless attacks committed in adulthood.

In March 2013, Ntaganda surrendered to the U.S embassy in Rwanda and asked that he is taken to the ICC. Trial began in 2015 with over 2,000 victims cleared to take part in the process, becoming the first individual to voluntarily surrender to the ICC.

The acts were said to have been committed while Ntaganda was deputy chief of staff of the military wing of the Union of Congolese Patriots. 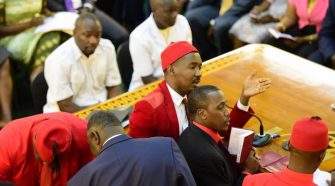