The International Criminal Court (ICC) will Monday hand down a verdict in the trial of a former Congolese General, Bosco Ntaganda who is charged with crimes including using child soldiers and rape.

Ntaganda has been charged with 18 counts of war crimes and crimes against humanity for his involvement in alleged atrocities carried out in Congo’s northeastern Ituri province.

He was kidnapped as a child and groomed to be a soldier. His lawyers asked that the court treats him not as a brutal warlord but a victim of circumstances borne of a conflict that claimed thousands of lives.

In the said conflict, civilians were murdered, women and young girls were raped while children under the age of 15 were conscripted and used to fight as rebels.

However, the prosecutor argued that Ntaganda’s recruitment as a child was no excuse for ruthless attacks committed in adulthood.

In March 2013, Ntaganda surrendered to the U.S embassy in Rwanda and asked that he is taken to the ICC. Trial began in 2015 with over 2,000 victims cleared to take part in the process. He is the first individual to voluntarily surrender to the ICC.

The accused has previously told court he is a soldier not a criminal. He also denied the nickname “Terminator” which many have used to describe him.

The charges against him are alleged to have been committed between 2002 and 2003 in the mineral-rich Ituri region of the DRC.

The acts were allegedly committed while Ntaganda was deputy chief of staff of the military wing of the Union of Congolese Patriots.

Prosecutors say the accused deserves the highest sentence to allow for the victims to put what happened to them behind them.

They said the attacks for which Ntaganda is accused primarily targeted people according to their ethnic origin, such as those belonging to the Lendu, Bira and Nande groups. 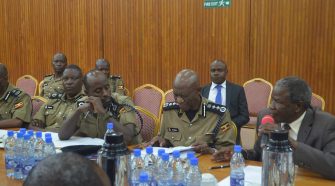