The Inspector General of Government (IGG), Irene Mulyagonja has cleared former Executive Director for Bank Supervision at Bank of Uganda, Justine Bagyenda over allegations of illicit amassing of wealth.

The IGG said this Wednesday while appearing before the Parliament committee on Legal and Parliamentary Affairs on Wednesday. Mulyagonja noted that there was no evidence to implicate Bagyenda after finding out that her wealth was proportionate to her earnings.

In 2017, a concerned Uganda, Denis Nyombi, a lawyer from Denis Nyombi & Co. Advocates said he was privy to information that Bagyenda underdeclared her assets and liabilities to the IGG contrary to the Leadership Code Act, 2002.

Nyombi argued that Bagyenda and other officials in her Directorate had accumulated several properties yet they earn a gross monthly salary of less than Shs 32m.

However, Mulyagonja now says there was no evidence of false accumulation of wealth in the case of Bagyenda as well as the other government officials who were subjected to an investigation after leaked documents raised eyebrows in public on how they came to acquire their wealth.

The verification exercise revealed that all the declarations were commensurate with known sources of incomes.

Mulyagonja said that the Inspectorate had finalized verification of 39 government officials against the biannual target of 150 officials and the assets investigated were worth Shs33bn.

She noted that investigation into the conduct of Bagyenda also found out that she did not breach any codes in the Leadership Code. 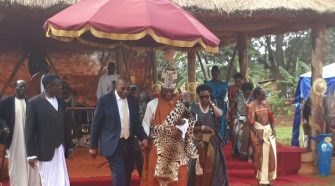