The IGG’s office has tasked Uganda Tourism Board (UTB) to explain the circumstances surrounding the termination of employment of some of the staffers which is said to have been done in violation of the law.

This follows complaints filed by some employees at UTB to the IGG’s office in which they alleged that they were unfairly laid off in what is said to have been a restructuring process.

A few weeks ago, the Chief Executive Officer at UTB advertised various vacancies in major dailies, calling for applications. Now it appears, this was done in contravention of some sections of the Inspectorate of Government Act and the standing orders of the Ministry of Public Service.

In a July 23 letter addressed to the UTB Chairman, the Deputy Inspector General of Government (IGG), George Bamugemereire wrote; “The IGG has received complaints in which it is alleged that various members at UTB have been unfairly removed from their positions under the pretext of restructuring”.

“It was further alleged that the process of restructuring at UTB is irregular and in violation of standing instructions from the Ministry of Public Service,” the Deputy IGG added.

He informed the UTB Chairman that all matters related to restructuring in government institutions are supposed to have been halted pending conclusion of a rationalization exercise of government agencies.

In this regard, the IGG alluded to a copy of a letter addressed to the CEO at UTB by the Permanent Secretary in the Ministry of Public Service.

“This is therefore to require you by virtue of Section 12(b) and (c) of the Inspectorate of Government Act to confirm whether in fact UTB has ended employment of any staff members since January 2018 and if so, explain circumstances under which the employment was ended,” the Deputy IGG wrote in his letter.

The letter is also copied to the Minister for Tourism, the Permanent Secretary in the Ministry of Tourism, Wildlife and Antiquities, the Secretary to the Treasury and the CEO at UTB.

“You are further required to explain the basis upon which UTB is apparently going ahead with the restructuring despite clear and firm guidance to the contrary from relevant authorities,” he said.

Section 12(b) and (c) of the Inspectorate of Government Act requires a public officer or any other person to answer questions concerning his or her duties or those of another person. It also requires a person in charge of a public office to produce or furnish within a specified time, any document or certified true copy of such document which is in his/her possession or under his/her charge. 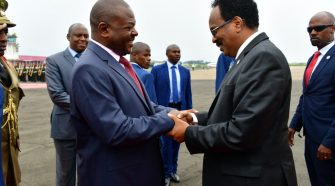