The Inspector General of Police, Gen Kale Kayihura‏, has expressed deep sorrow at the passing of Ugandan soldiers who were killed on duty in Somalia.

On behalf of Uganda Police and his own, Kayihura extended his sincere condolences to the UPDF fraternity, the Chief of Defence Forces, Gen David Muhoozi, and the families of the 12 killed gallant soldiers.

“They lost their lives in defense of peace and security in our region to the Al Shabab terrorists in Somalia,” Kayihura said in a twitter message.

He added: “We shall always remain indebted to their selfless service. Their service to the country and the region will not be in vain. May God rest their souls in eternal peace.”

On Tuesday, Members of Parliament tasked Adolf Mwesige, Minister of Defence and Veteran Affairs, to produce a report on the number of Uganda People’s Defence Forces [UPDF] soldiers who died in Somalia on Sunday.

This was during a plenary session chaired by deputy speaker of Parliament, Hon Jacob Oulanyah who also ordered the minister to prepare a brief statement for the house.

Earlier, the Special Representative of the Chairperson of the African Union Commission (SRCC) for Somalia, Ambassador Francisco Madeira commended the courage and bravery of AMISOM troops.

The troops were ambushed during a regular patrol to secure the Mogadishu-Barawe Main Supply Route.

“The African Union Mission appreciates and honours the heroes whose lives have been lost while pursuing peace and stability in Somalia. I extend my deepest condolences to the families of our fallen soldiers, the people and government of Uganda,” Ambassador Madeira stated.

UPDF leadership has finalised plans to have their remains airlifted back home for a decent burial.

The plane carrying the caskets of the deceased will touch down Entebbe international airport at exactly 1330Hrs.

The Deputy CDF Lt Gen Wilson Mbadi and other UPDF and Ministry of Defence senior officials will be present. 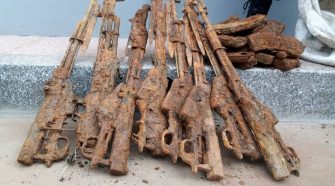 8 Rusty Guns Recovered from the Underground in Kabale