President Yoweri Museveni has implored the people of Teso subregion to focus more on preventing diseases by ensuring proper hygiene and good nutrition. He said that although government plans to construct more health facilities, the priority should be avoiding illnesses.

Citing his personal example, Museveni said that even at age 73, he has not fallen sick because he has managed to avoid sickness.

“I have managed to make it to 73 years of age because I do not drink alcohol,” he told the congregation shortly after he had cautioned against indulgence in alcoholism.

“I have been here for the last 30 years and all this time you have never heard that Museveni is sick and is in hospital. I do not have time for sickness,” he added.

He explained that his government has made significant strides in the health sector, particularly in the aspect of immunization. Having began with only 8 vaccines, he said, now up to 13 diseases are immunizable including Hepatitis B.

“Health is wealth. When you are healthy you can do anything that you want to do,” the President remarked.

He added; “After blocking diseases by immunization, if the Chairman and the District Health Officer could promote proper hygiene, ensure proper construction of latrines and washing of hands after visiting the latrines, most of the diseases would be eliminated”. 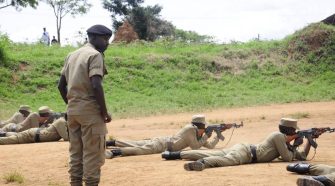