Singer Joseph Mayanja (Jose Chameleone) has criticized events promoter and NRM loyalist, Balaam Barugahara for misleading the public to believe that he (Chameleone) was scheduled to perform at an event presided over by President Yoweri Museveni.

This was after Balaam shared an article run by one of the blogs with an article claiming that Chameleone, Ronald Mayinja and 200 other artistes were lined up to perform at the Saturday event.

The event dubbed ‘Patriotism Katchup’ was organized by the National Patriotism Secretariat along with Balaam Barugahara, a popular events promoter and supporter of President Yoweri Museveni.

In a Facebook post, Chameleone who has previously worked closely with Balaam asked that the entertainment entrepreneur respects his political choices.

He also said that given that he is now a member of the political opposition, he will no longer be associated with NRM events including performing there as an artiste.

“Like you always ask others respect you and all you views I kindly request you My brother to put same on me,” Chameleone wrote.

“I am a DP Chief international mobiliser and you clearly know that lying to people that I am going to perform at your NRM Youth function is a total lie”.

A few months ago, Jose Chameleone who has for long been known to be a supporter of President Yoweri Museveni declared his political ambitions to run for Mayor of Kampala in the 2021 elections. He also announced that he had subscribed to the Democratic Party (DP), one of the opposition parties.

On Saturday, Chameleone said that for him to perform at an NRM event “is not possible anymore”.

He wondered how he could be advertised for an event in Kampala when he is not even in the country. The singer is in USA “for my Democratic Party Duties”.

Fellow musician, Bebe Cool, a sworn supporter of Museveni and NRM was among the artistes that performed at the Kololo event.

In July this year after crossing to DP, the Afro Pop musician said he has never supported President Museveni’s NRM party, claiming the party only solicited his services like any other person.

“I want to assure you that I have never been an NRM supporter. But I only worked for NRM the same way others went there to decorate or print T-shirts or those who did catering for NRM,” he explained.

He added that it was for the support that his fans have given him over the years that President Museveni’s camp considered associating with him as a performer.

“I went there because of that base that I had. He called me so I could get on his chariot and we move it further”.

He says he is primarily a musician, a career that spans over two decades and that in the course of his career, he has sang at different events for different people. It is in this same light that he sang at NRM events, Chameleone said. 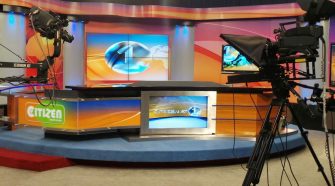