Former critic of President Yoweri Museveni, Kitgum municipality MP Beatrice Anywar has lauded President Museveni as a great and tolerant leader. She said that she is ready to work with the President if appointed Minister.

Anywar was speaking in an interview with journalists in Kampala on Wednesday.

“He is a great leader who is tolerant, listens to some of us. Any time there is an opportunity, I will work with President Museveni without regret,” Anywar said.

Last week, Anywar an independent MP formerly a member of the Forum for Democratic Change (FDC) shocked Ugandans when she took to the podium and voted ‘YES’ to lift the lower 35-years and upper 75-years age caps from the constitution.

With the age limits removed by Parliament now, President Museveni who is now 73 will be eligible to run for a sixth term come 2021.

Anywar’s support for the Bill was a shocker to the wider opposition which vehemently challenged the amendment in the months leading to its passing.

She, however told the media that same day, that she had voted YES in support of reinstatement of term limits to the constitution.

Anywar who was nicknamed ‘Maama Mabira’ for her fight against the allocation of part of Mabira forest to investors is not new to contoversy. In 2015, she endorsed former Presidential candidate Amama Mbabazi and later fell out with her FDC party.

On Wednesday, she said she will stick to President Museveni since neither Amama nor Dr. Kizza Besigye was able extend services to her constituency.

“My people can not get service delivery from Amama Mbabazi or Dr. Kiiza Besigye,” Anywar told journalists.

In 2007, Anywar who was then shadow minister for environment in Parliament strongly criticized President Museveni over his move to parcel out over 7,000 acres of forest land in Mabira to Mehta Group to have the land used for sugarcane growing.

She rallied other MPs who mobilized demonstrations in Kampala to protest against the ‘sale’ of the land. The protests turned violent and some people were killed.

The President has since criticized the legislator for being an economic saboteur.

But that’s not the only war Anywar has picked up with Museveni’s government. She has often blamed the NRM for lacking the political will to put Northern Uganda on equal footing with other regions of the country.

It remains unclear how the once political foes suddenly turned to be allies and whether Anywar could be rewarded for this. 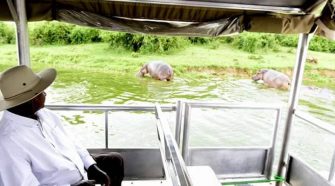