The Justice and Constitutional Affairs Minister, Maj Gen Kahinda Otafiire has asked Parliament to expedite passing of the Judiciary Bill in order to ensure the judicial officers get better remuneration.

He said this during the burial of a long-serving Justice of the Supreme Court, late Alfred Karokora who passed on last week.

In their eulogy at the burial ceremony in Mbarara municipality on Wednesday, the children of the deceased lauded their late father for striving to educate them despite the meagre pay he was earning as a judicial officer.

Otafiire acknowledged the challenge in his remarks, saying  most of the judicial offices fail to support themselves after retirement. It is against this background that the Minister appealed to parliamentarians to pass the bill.

“Those of us who enjoy the fruits of those sacrifices must appreciate. When they say a Judge lives hungry because he has to live up to his calling those of us who benefit from such sacrifice must also reciprocate. That’s why I want to take this opportunity to call my colleagues in parliament to ensure that we pass the resolution of the judiciary bill especially the aspect of according to a judge a descent life,” Otafiire said.

He said that some Judges become desperate after retiring from the judiciary.

He said that being a judicial officer is a full-time service which requires a lot of sacrifice.

“Being a Judge is devotion, it’s like a religion. You can’t be a good judge, good doctor or good teacher without sacrifice”.

“And if we want our judges and our judicial officers to be dedicated to their work, we also must realize that they are human beings with human needs”

The Minister told mourners to live a life that does not infringe on others.

“Let’s live and allow other people to live. There are those who think they have occasioned circumstances that give them privilege above everybody else.”

He condemned civil servants who enjoy those privileges so much but do not want to allow those who coexist with them on earth to enjoy their rights as God given. 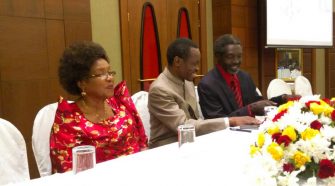