A new report by the World Bank is recommending efforts aimed at improving the self-reliance of refugees in Uganda in a bid to reduce their dependency on humanitarian assistance and enhance their contribution to the country’s economy.

Uganda is currently hosting 1.3 million refugees and is the country with the largest number of refugees in Africa and the third largest in the world.

Refugees in Uganda access the same social services as their local host community and are free to move and work. When possible, they are allocated a small piece of land to settle and farm, which encourages self-reliance, and promotes their coexistence and integration into local communities.

However, according to the report, “Informing the Refugee Policy Response in Uganda,” refugees in Uganda primarily depend on aid: about 54% report aid as their main source of income.

The report is a collaboration with the Uganda Bureau of Statistics (UBOS) and the Office of the Prime Minister and is based on the 2018 Uganda Refugee and Host Communities Household Survey. It is funded by World Bank’s State and Peacebuilding Trust Fund.

Reliance on aid goes down for earlier cohorts: humanitarian assistance is the main source of income for 37% of refugees that arrived more than 5 years ago, while the same is true for 62% of recent refugees (arrived less than two years ago).

But funding towards humanitarian aid for refugees continues to shrink. Last month, the United Nations High Commission for Refugees (UNHCR) in Uganda reported a 65 percent shortfall in the humanitarian agency’s annual budget.

It warned that programs for priority areas such as safe water systems, education and health are likely to be critically affected.

The UN refugee agency appealed for more funding from international donors and partners.

The report also shows that refugees contribute significantly to the local economy, by purchasing goods and services in the local markets and operating businesses.

About one in 5 employees of refugee enterprises is a Ugandan and around 54 percent sell off their crops. However, weather shock and low access to agricultural inputs constrains their productivity which makes them food insecure and to rely on humanitarian assistance.

Despite feeling safe and secure in Uganda, about half of the refugee population (48 percent) live in poverty, compared to 17 percent of the host population. Poverty among refugees is highest in the West Nile region of the country where close to 60 percent of refugees are poor and around 30 percent of hosts are poor. Around 54 percent of refugees depend on humanitarian assistance as their main source of income compared to less than 2 percent for the hosts. Their inability to generate income is constrained by low levels of human capital as less than 8 percent have received skills or job training.

Tony Thompson, World Bank Country Manager for Uganda said; “The people of Uganda have been incredibly generous towards refugees, and this generosity of the host communities should be recognized by supporting them to have a higher quality of life”.

“This study provides an evidence-based understanding of the living conditions of both refugees and hosts, which we expect will inform policy and programming for the national refugee response,” he added.

He said that the ability of the refugees to generate income is constrained by low levels of education, expertise, low access to productive assets and job opportunities.

Policies that improve the self-reliance of refugees will not only enhance their living conditions but also their ability to contribute productively to the Ugandan economy, Thompson noted.

“Self-reliance should continue to be at the center of policies and programs. This involves increasing the productivity of those already engaged in economic activities as well as creating new opportunities”.

About 95 percent of refugees and 66 percent of hosts have access to improved water while access to electricity stands at around 50 percent for both. Primary school enrollment is almost at par with refugees at 65 percent and hosts at 68 percent.

Completion rates and secondary enrollment rates remain low for both populations but particularly for refugees, and the same goes for improved sanitation.

The health and health care access of both populations however remains similar. More than 80 percent of refugees and hosts r, however,consulting a healthcare provider when sick. Refugees are geographically closer to health centers, with at least 75 percent traveling 3 kilometers to reach a healthcare center when ill, compared to 65 percent of hosts.

This is made easier by NGOs that provide healthcare services for refugees within or very close to the designated refugee settlements.

Refugees are younger than hosts. Around 56% of refugees are below the age of 15, and around 25% are younger than 5 years of age. This group represents a particularly vulnerable group that requires special attention, as the first years of life are essential to the formation of human capital. This underscores the importance of humanitarian help, particularly for recent refugees. 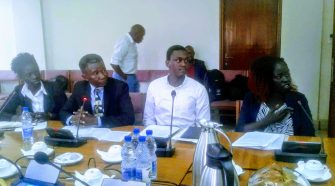