A council meeting for Kampala Capital City Authority (KCCA) seeking to debate the budget framework paper hit a snag in the wake of a conundrum surrounding the failure to appoint the Authority’s Executive Director.

According to the law, the Executive Director is the accounting officer of the Authority.

The KCCA Act Section 19 (f) states that only the Executive Director has the powers to present the budget framework paper to the Authority.

However, according to the Mayor of Kampala, Erias Lukwago, the Acting Executive Director, Eng Andrew Kitaka who was appointed by President Yoweri Museveni in December 2018 has since lost his legal status as the Acting E.D since the law only allows him to serve in Acting capacity for only 6 months.

Jeniffer Musisi who was the Executive Director of Kampala resigned in December last year and the President who under Section 17 of the KCCA Act has the powers to appoint an Executive Director has not appointed a successor for Musisi.

“There was a vacuum that was created and the Minister in her wisdom, she said she would have a person in acting capacity,” Lukwago said on Friday.

“We have Eng Kitaka who is substantively appointed as Director of Engineering and Mr Serunkuma who is in charge of Revenue. But they were assigned the duties of Acting E.D and Acting Deputy E.D”.

He added that: ” Under the Public Service Standing Orders, a person in acting capacity cannot exceed 6 months. So by operation of law, Eng Kitaka ceased being Acting E.D effective May 15, 2019″.

Following the stalemate, a delegation from KCCA including the Mayor’s Deputy, Sarah Kanyike and the Head of Legal and others met with the Minister of Kampala, Betty Kamya to discuss a way forward.

The Minister has since asked the Authority to wait for the Cabinet sitting due next week on Monday as well as an opinion from the Office of the Solicitor General on the matter.

The Mayor wonders why the President has taken all this while to select the substantive Executive Director since December of last year.

“Six months is adequate for the appointing officer to take a decision. You would as the President, all this while, what has he been doing? It’s coming to a year now Why hasn’t he appointed a substantive ED?” the Mayor wondered.

“He has the time to move around Kampala to appoint Butcherman, Kusasira and the others. What is so difficult to appoint someone to take charge of the affairs in the office of the Executive Director of KCCA, ” he said, making reference to singer Catherine Kusasira who was recently appointed by the President as Presidential Advisor on Kampala Affairs. 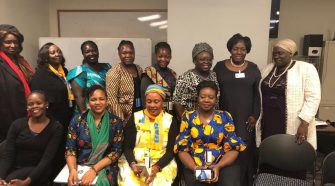 Kadaga Calls for Recognition and Value of Domestic Work by Women