State Minister for Privatization and Investment, Evelyn Anite has finally admitted to having flown to Mauritius, following an article ran by SoftPower News and a subsequent petition by a Whistleblower to the IGG demanding that the Minister be investigated for “secretly” travelling to Mauritius where she allegedly held meetings with a state-owned telecom company bidding for Uganda Telecom Ltd (UTL).

The Minister in her letter dated August 19 addressed to the IGG’s office makes reference to an earlier petition by a whistleblower which reported to the IGG that the Minister had travelled secretly to Mauritius.

In the letter, the whistleblower alleges that Anite flew to Mauritius to irregularly seal the deal for a UTL strategic investor – Mauritius Telecom – which the Minister is reportedly lobbying for.

The whistleblower contends that the motive, timing and nature of Anite’s discreet trip to Mauritius are very suspect, given the circumstances surrounding the insolvent UTL.

This is contained in a letter authored by an anonymous whistleblower and which is addressed to the Anti-corruption Unit and the IGG. Both letters, copies of which SoftPower News has managed to see were officially received on August 14.

The whistleblower accuses Minister Anite of influence peddling, abuse of office, corruption and conduct unbecoming of a Minister and Honorable Member of Parliament.

The author makes reference to a letter dated July 12, 2019 in which Minister for Privatization and Investment, Evelyn Anite sought leave from the Prime Minister from July 16 to August 12, to travel to the United States for graduation after completion of Masters of Arts in International Relations and Diplomacy at Tuft University.

The whistle blower reveals that the Minister travelled aboard KLM Airline in company of her husband, to the U.S from Entebbe on July 15.

The said trip was not booked in Uganda before her departure for USA. In Mauritius, the whistleblower states that she met with the team responsible for ensuring this deal happens and they acquire UTL at a much less value than the asset value estimated at USD 84m. She later flew back to the USA and back to Uganda to disguise her trip to Mauritius.

In response, Anite wrote to the IGG saying “I am not banned from travelling to any country in the world” and wonders “why this would be of any interest to anyone”.

She however admits to having indeed travelled to Mauritius but that this was an academic related trip.

“On the allegation that I inappropriately travelled to Mauritius, I am not on any travel ban, therefore fully free to travel in any part of the world as long as I am facilitated by personal resources,” Anite writes.

“I travelled to Mauritius from August 4th to 11th 2019 as part of a contingent of students on a 3 months Senior Executive program – Africa, by run the Harvard Business School and Gordon Institute of Business Science”.

Related: Inside Story: Anite Brokered a Deal with Investors for UTL, Now She’s on Pressure to Account

She claims the first segment of the program is structured in a way that some class days are spent at the Harvard Campus in Cambridge Massachusetts while the second round will be conducted in Cambridge.

The Minister provided to the IGG names of individuals she claims are on the same academic program with her namely – Edgar Byamah (Managing Director of KCB Bank), Peter Mungoma (CEO Capital FM), Sam Mwogeza (CFO Stanbic Bank) and Kevin Wingfield (Head of Retail and Commercail Banking at Stanbic).

“My classmates can be contacted to attest and confirm foregoing.

SoftPower News sought confirmation from the IGG’s Office regarding whether the letter from Anite had been received.

“We received a letter from Anite yesterday. She is giving us information that will be useful to us,” Munira Ali the spokesperson for the IGG’s Office told this news website on Thursday.

“Like I had previously informed you, we launched a preliminary inquiry (following the whistleblower allegations) and now this letter from the Minister is going to help with the inquiry,” she added.

Asked whether the admission by the Minister (to traveling to Mauritius as initially alleged by the whistleblower) is enough evidence to prompt a comprehensive investigation, Munira said it is too early to prove.

“It’s too early to prove. We are now going to use that information, review it, also look at the other information we have been receiving. That is what will inform how we proceed”.

When SoftPower News first reported about Minister Anite’s trip to Mauritius, the Minister dismissed the article and took to social media venting against the news publication as “gutter online news.”

At the time, she declined to state that the academic program she said she was attending was actually in Mauritius. She instead told some news publications that she was in the U.S.

In yet another attack on the media (which had verified and reported facts as were), she peddled falsehoods alleging that “SoftPower News are in hiding after I exposed their alliance with the corrupt”.

During a news conference on Monday this week, Anite was asked by a reporter to give a straight answer as to whether or not she travelled to Mauritius in the period alleged by the whistleblower, but instead, the Minister tactfully sidestepped the question.

“Why do you care where i travel when I’m on leave? Did you hear there is a travel ban against me? Did you hear I’m not supposed to travel anywhere in the world?” she said in response.

“Whether i have been there (Mauritius), it’s not your business. I have classmates who know I’m in Harvard School of Business. They are Ugandans. That’s why i need the IGG to carry out a public hearing”.

She said “we will confirm whether i was in Mauritius or not” during the public hearing.

Regarding the IGG probe, she said she is ready to cooperate, although she said the investigation should be done in the public realm.

“I’m not fighting a personal fight. I’m fighting to liberate our country from these renown powerful thugs who have been entrenched in government and are used to getting off the hook each time they are in a scandal”.

“They have plotted that the IGG should investigate me. I do not fear any investigation; I’m not like them who run away from an audit. I don’t use legal gymnastics,” she told reporters at her office.

She said that she has no relationship with the Mauritius Telecom.

“I have no relationship with Mauritius Telecom. The first time i came in contact with them was when the Administrator came to me and gave me the list of 7 companies that had interest in investing in UTL”.

“I want to be that example that if the IGG must investigate me, it should be in full glare of the media. And I’m here ready to answer any queries from the IGG”.

When this news website spoke with the IGG’s Office last week, the spokesperson, Munira Ali said a petition relating to UTL had been received and that a query had been instituted to determine whether or not to initiate a probe. 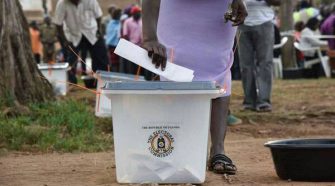