Government has issued new guidelines for drivers of trucks which transport cargo through the East African region, detailing the spots where they will stop and where they will be secluded at night. The directives are part of the steps to slow the spread of coronavirus.

It follows a meeting held last Friday by the Trade and Transport National Task Force sub-committee on Covid-19 on the issue of truck drivers which have become controversial in recent weeks. Recent updates by the Ministry of Health indicate that the most recent Covid cases have been truck drivers who arrived in the country from Kenya and Tanzania.

This has prompted Ugandans to demand that the cargo trucks be stopped while others have suggested that the drivers be held at the entry points pending the release of their Covid tests results. However, experts have said holding the drivers would result into congestion which can further facilitate infection.

Commenting on the issue on Tuesday, President Yoweri Museveni said that blocking cargo would be suicidal, since what is left of the economy depends on this cargo and how it is delivered.

Truck drivers have been directed to strictly observe and follow the guidelines on recommended seclusion areas (night stop) along the cargo transit routes.

The meeting drew up different seclusion areas for different cargo transit routes. Each route will also have a gazetted point for health-breaks points.

District COVID-19 Task Forces have been tasked to ensure they secure the recommended night seclusion areas (night stop-over points) and also put in place arrangements for truck drivers to access food and other amenities following the guidelines put forward by the Ministry of Health.

Each driver will be required to carry a Health form which he should present at the seclusion points or at any time when required to do so.

Trucks will not be allowed to divert off the designated routes.

Critical agencies including Ministry of Health have been asked to operate 24 hours at Malaba, Mutukula and Busia borders. Government will also reinforce border patrols and surveillance at all illegal entry points.

Freight Forwarders will work with the Ministry of Health on modalities for purchasing of Testing Kits.

The drivers will be required to have and use Personal Protective Equipment (PPE) and sanitizers at all times.

In the case of a mechanical breakdown, the driver should report to the next police station and the transport company must ensure that the vehicle is cleared off the road within 24 hours.

In case of imported motor vehicles, they will be delivered at the border, fumigated and picked by the drivers to deliver them to their destinations in the hinterland

Operators of trucks which ply the hinterland mobilizing and transporting agricultural produce will report to the District Task Force which will guide them on how to manage their operations without violating the Ministry of Health guidelines.

6 hours ago
News in Pictures 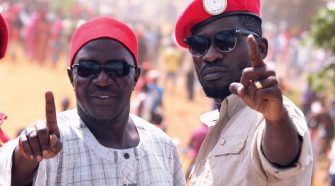