President Yoweri Museveni of Uganda and his Rwandam counterpart, Paul Kagame have Wednesday signed a peace pact committing that both countries will respect the sovereignty of each other and of the neighboring countries.

The pact was signed in Luanda, Angola, follows months of frosty relations between Uganda and Rwanda. In February this year, Rwanda closed its main border with Uganda at Katuna and blocked cargo from crossing into its territory causing a customs crisis. Since then there have been accusations and counter accusations between Kampala and Kigali mostly relating to security.

Museveni and Kagame met in Luanda on Wednesday at a Quadripartite Summit on regional cooperation and security chaired by the Angolan, President Joao Lourenco of Angola. Also in attendance was DRC President, Felix Tshisekedi and President Denis Sassou Nguesso of the Republic of Congo.

In the pact, the two Heads of State of Uganda and Rwanda undertook to respect the sovereignty of each other and of the neighboring countries. They also undertook to refrain from actions conducive to destabilization or subversion in the territory of the other party and neighboring countries thereby “eliminating all factors that may create such perception as well as that of acts such as the financing, training and infiltration of destabilizing forces.”

Kagame has also committed to resume as soon as possible the cross-border activities between both countries including the movement of persons and goods for the development and improvement of the lives of their populations.

The two administrations will establish an Ad Hoc Committee for the implementation of the MoU headed by the Ministers of Foreign Affairs and composed of the Ministers responsible for international Administration and the Heads of Intelligence of both countries.

Facilitators of the process will keep appraised by Uganda and Rwanda in the implementation of the MoU.

“By signing this Memorandum of Understanding, each signatory party is aware that it will be held accountable for the non-compliance of this Memorandum,” the MoU reads in part.

It further states that disputes and differences in the implementation of the pact shall be settled through dialogue between the parties or as appropriate through the help of the facilitators.

Rwanda has repeatedly accused Uganda of illegally arresting its nationals and deporting them as well as hosting elements considered hostile by Rwanda, but Uganda denies these claims.

The Ugandan government has maintained that it will not allow its territory to be used to threaten the security of its country.

Uganda hosts over one million Refugees including Rwandans. The country’s open-border policy to refugees is hailed by the UN as the best in the world.

A number of Rwandans have been deported for involving in acts subversive to Uganda’s security while others are currently facing the Ugandan General Court Martial for kidnapping and repatriating Rwandan refugees back to Rwanda against the laws of Uganda and international law.

Uganda’s Foreign Minister has previously stated that as Rwandans are welcome to visit Uganda, they are required to abide by the laws of the land.

In a March 10 correspondence by President Museveni to President Kagame, he said; “What is wrong is for Rwanda agents to try to operate behind the government of Uganda. 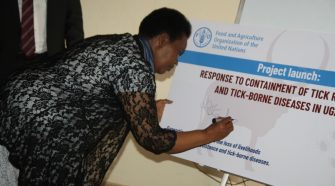