Gen David Muhoozi, the Chief of Defence Forces has underscored the role of the forthcoming Interforces Games and Championships in maintaining cordial relations amongst the armed forces as well as between the forces and the civilians.

Hosted by the Uganda Peoples’ Defence Forces (UPDF), the games are scheduled to take place between September 15 and 24 at the Land Forces headquarters at Bombo, Kigo Range shooting Grounds as well as Namboole stadium.

Gen Muhoozi was speaking about the games on Saturday during a news conference at Uganda Media Centre.

“The objective of these games is to continuously, deliberately and consciously enhance joint operations for sustainable national security and socio-economic development and transformation which the forces have already done and accomplished individually and jointly,” Gen Muhoozi said.

According to the CDF, the exercise will also seek to; promote physical fitness of the armed forces, sports and service professionalism, sports entertainment, inspire the youth among other benefits.

They will run under the theme “Interforces games and Championships for enhancing  joint National Security and Socio-Economic Development”.

Muhoozi said that the sum total of these activities is to enhance and consolidate national Security and socio-economic Development and Transformation.

He appealed to the armed forces to harmoniously compete and excel in sports, “while at the same time remaining conscious of the need to be productive in order to contribute to the security, stability and prosperity of Uganda”.

He assured participants that Awards such as gold medals, trophys, cows and money will be given to the victors.

During Saturday’s news conference, Odong Piny, the Deputy Director for Special Duties who representative the IGP appealed to the public to turn up in big numbers and this will enhance co-operation between the forces and th civilians.

Other officials who were present were Moses Kakungulu, on behalf of the Commissioner General of Prisons and Bashir Hangi, the Communications Manager for UWA. 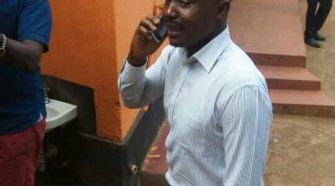