Uganda Peoples’ Defence Forces (UPDF), has for years positioned itself as a professional force which is subodinate to civilian authority and service. On top of defending the country, the force continues to engage in several rescue missions aimed at saving lives as well as extending their peace keeping services to several African countries including among other countries Somalia, Central African Republic and South Sudan.

UPDF’s values of service above self have further been witnessed in rescuing flood and landslides victims in Kasese, Bundibugyo, Bududa districts and the rescue mission that followed the Lake Victoria accident in 2018 in which over 40 people died.

The Force is currently part of the Inter-Agency Joint Task Force (JTF) at National and Regional levels to support the Ministry of Health in combating COVID-19 epidemic in Uganda. In conjunction with the local authorities, they are at the forefront of the house to house distribution of relief food to the vulnerable people. 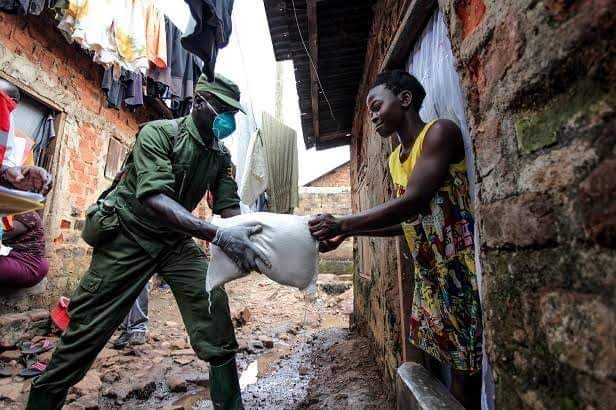 This week, SoftPower News exclusively spoke to the Defence Spokesperson, Brig Richard Karemire on the motivation behind the army’s pro-people conduct, their role in the fight against COVID-19 and the challenges faced, as well as the position of UPDF on the recent incidents of misconduct by the Local Defence Unit personnel (LDUs).

Clad in military combat, the soft-spoken army Brigadier started by saying that the Force would not disappoint on COVID-19 fight since it is its constitutional obligation to save lives of Ugandans.

“UPDF had to rise to the occasion during the campaign against Covid-19, we couldn’t afford disappointing Ugandans, we had to fulfill our constitutional obligations. Article 209 speaks out on the functions of the Defence Forces and one of them is to cooperate with civilian authority in emergency situations and also in case of disasters. There is no doubt that COVID-19 situation is an emergency because it has been serious and indeed it is serious, it was unexpected, it is very dangerous and required immediate action,” Karemire said.

“We are glad that we have been part of the national effort to contain this pandemic and we are doing it very successfully. The UPDF from the beginning deployed its 282 medical personnel to support the health team who immensely contributed to this success story and they remain available if there is any need and a skeleton staff of senior experts is still working with the Ministry of Health,” he added.

Karemire says the UPDF medical experts also ensured that other members of the Force comply with the guidelines of the Ministry of Health regarding COVID-19 in order for them not to contract the virus.

According to Karemire, the country has been able to keep the virus at bay within Uganda and in countries like Equatorial Guinea and Somalia where UPDF is deployed on peace keeping missions.

He however said: “In Somalia, we had a case and he is currently out of danger after being properly attended to. We are glad we were able to share such capacity.”

The UPDF has also opened some of their facilities like Health Centres for public usage if needed, according to the Defence spokesperson.

In the wake of COVID-19, Uganda’s National Security Council in March set up an Inter-Agency Joint Task Force (JTF) at National and Regional levels to support the Ministry of Health in combating the epidemic in Uganda. The team comprising of among other security agencies and led by the UPDF always conduct joint operations in enforcing the directives as well as routinely briefing the country on the progress of the fight as far as security is concerned.

“UPDF has played a very supportive role to the Police alongside other friendly security forces without excluding our brothers and sisters – the LDUs. We always conduct joint operations in support of each other and that is why the country is peaceful with few incidents of crime. The joint security forces have spent hundreds of hours on check points, border patrols, enforcement of curfew, which measures, have saved our people and the country from the pandemic,” Karemire reiterates.

It should be remembered that when the President passed directives banning public transport as well as ordering the closure of shops that were not selling foodstuff, there were many complaints from the public that security personnel particularly from the LDU, would enter people’s houses and beat them up.

The President, during one of his addresses on Covid-19, said that was wrong. Earlier, the Chief of Defence Forces (CDF), Gen David Muhoozi came out and apologised to the public for the conduct of the officers. He also said the commanders of the unit were required to ensure that rules of engagement are adhered to.

Now, Karemire says the LDUs have performed extremely well in ensuring security and safety of Ugandans in Kampala Metropolitan Area despite the isolated incidents of individual personnel who have since been punished.

“While there were hitches and glitches, the UPDF leadership promptly addressed them. I must salute the LDUs that are part of the UPDF, they have done a great job despite some public bashing as a result of mistakes by a few of them. The mistakes were corrected on time and the officers involved punished, correction is a process and we shall not give up on that – we have our own vaccine within the forces called political education which is administered through training and continued sensitisation of our forces on what is good and bad,” says Brig Karemire.

He says: “LDUs are part of us as UPDF, it is an auxiliary force that has worked with us for a very long time and they have done a great job. The LDUs fought alongside us during the counter insurgence wars in northern Uganda against the Lord’s Resistance Army and the rebellion was thoroughly defeated which brought absolute peace and stability in the area.”

“They worked alongside us in Karamoja during the disarmament campaign and the subregion is now far better than how it was years back. Recently, there was a high spate of crime in Kampala Metropolitan area that caused massive recruitment of the LDUs and the area is now better – the rate of crime has exponentially reduced, all because of the work of the LDUs,” explains the Defence spokesperson.

“It is important to note that not all LDUs have misbehaved, these are just individuals who at times get off the line and we take action, we don’t cover-up their mistakes”

“We continue to administer this vaccine to our LDUs and it is our ultimate solution alongside the application of the various laws. If you make a mistake, we correct you but there is also room for punishing you in accordance with the established laws. Indeed you have seen many of the members of LDU taken to Court and charged,” he adds.

The Defence spokesperson says, UPDF is built on four pillars – patriotism, pan-Africanism, discipline and the ideology of being pro-people. These, he says, makes UPDF different from the previous armies.

Attacks by Civilians on Security Personnel

The country has so far witnessed 70 attacks on security forces since the announcement of lockdown and presidential directives to stem the spread of COVID-19, the most recent being in Kyankwanzi district, at the end of last month, where a senior military officer Maj Robert Nkwasibwe, was hit by drunkards found gathered and drinking during the curfew time.

Private Niwanyine Alex of the 71st Battalion, was in April attacked by a civilian at Bibia Trading Centre in Amuru District while asking traders to close their shops. He has since lost his eye.

Most of these incidents, Karemire says do not attract serious condemnation from the public and the media as it is the case while security officers make mistakes.

“We have shared this information with the media and human rights agencies but they are not brought out as loudly as they come out when there are glitches for example with our brothers and sisters of the LDU,” explains Karemire.

He however says that despite the attacks, the UPDF is determined to remain committed to offering themselves for the good of the people of Uganda.

“These few incidents will not derail us from our mission. We want to ensure that our people remain safe. We don’t want any since Uganda to die as a result of COVID-19,” he reiterates.

UPDF has also jointly worked with other security agencies in distributing food to the people of Kampala and Wakiso districts where more than 1.8 million people were supplied with relief items during the lockdown.

Meanwhile, the UPDF spokesperson says that as the army participated in the COVID-19 operations, they concurrently conducted other operations like fighting the locusts with teams deployed in Northern and Eastern Uganda under Maj Gen Sam Kavuma, as well as rescuing flood and landslides victims in Bugisu sub region and Rwenzori areas.

UPDF also took part in clearing the floating vegetation on lake Victoria which once led to a power black-out. 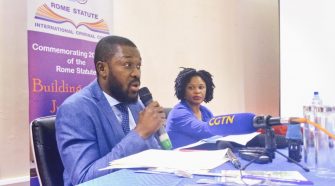 ICC Official Calls Out States that Undermine Warrants of Arrest