It has emerged that two months ago, the Auditor General, John Muwanga advised against carrying out a special audit on Uganda Telecom Limited (UTL) when the insolvent company is still in Administration, further raising questions as to why Minister Evelyn Anite is insisting on removing the Official Receiver, Bemanya Twebaze as the Administrator of UTL.

The State Minister for Privatization and Investment, Evelyn Anite has in recent days doubled down on her attacks of Bemanya, accusing him of frustrating the efforts by government to have UTL in which government of Uganda owns 31 percent shares, to carry out an audit.

In her letter to the Attorney General, Anite stated that government has encountered considerable difficulty dealing with the Administrator and has completely lost confidence in his ability to continue to serve the role of UTL Administrator.

She has also disregarded the legal advice given by the Deputy Attorney General, Mwesigwa Rukutana in which he said that government which through the Minister of Finance has shares in UTL, “has no locus to apply to court to remove the Administrator from office”.

Read More: “I Didn’t Seek Your Opinion, I Instructed You” – Anite Disregards Rukutana’s Advice on UTL

Rukutana also reminded Anite of a recent ruling by the Speaker of Parliament, Rebecca Kadaga who said that Administration is a court-controlled process and neither the legislature nor the executive should interfere with the process.

“Your subsequent conduct and particularly this request undermines the ruling of the Rt Hon Speaker…. Your instructions to me may be perceived as contempt of Parliament”, the Deputy Attorney General wrote.

Now, SoftPower News has obtained a copy of a letter written to the Minister of Finance by the Auditor General in response to a request to have UTL audited.

In the April 24 letter, the Auditor General noted that he had undertaken an initial background check on the status of UTL and established that the company is currently under Administration which is a Court -controlled process.

“This implies that the company is undergoing an insolvency situation wherein any actions undertaken have to be agreed upon by the creditors and all shareholders,” Muwanga said in the letter referenced FIIT 54/116/01.

He added that; “Any request for a special audit at this point in time may potentially pose legal challenges, unless it has been sanctioned by court”.

He further advised against such an investigation of UTL at a time when the administrator is in advanced stages of identifying an investor. This, Muwanga said, is likely to affect any potential investors’ views about the company.

“The Libyan shareholders have in the past complained about the reported discussions by the Administrator with government of Uganda yet they are all supposed to be independent of all shareholders”.

The Auditor General added that his intervention (by conducting an audit on UTL) following government’s request as a shareholder “is likely to be equally interpreted by UCOM as acting on behalf of only one group of shareholders”.

In December 2016, a select committee of Parliament was constituted to investigate the operations of Uganda Telecom Limited and all the recommendations are yet to be implemented.

“It is with this background that I am of the view that it is not prudent to commence such an exercise at this point in time. However, such a special audit can still be undertaken once the administration process is concluded,” reads Auditor General Muwanga’s letter copied to the Ministry of Finance and the Secretary to Treasury, Keith Muhakanizi.

It remains suspect why Minister Anite has persistently disregarded expert advice concerning the Administration of UTL even when the law is clear on the procedure that ought to be followed. Some have concluded that the persistent adamancy of the Minister points to influence peddling and a conflict of interest in UTL affairs. 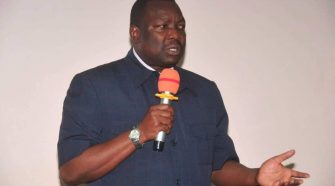