The President of Democratic Party (DP) also outgoing Chairman of the Inter-party Organization for Dialogue (IPOD), Norbert Mao, has expressed disappointment in the continued frustration of IPOD activities by the leading opposition party, FDC.

IPOD activities have recently faced a stalemate ever since DP’s term at the helm of the organization ended in September this year.

DP is supposed to hand over IPOD leadership to the Forum for Democratic Change (FDC) and has since accused their counterparts of expressing no interest in leading the organisation, saying this is an indication of a lack of commitment.

Some fear FDC which has repeatedly shunned IPOD summits could fail the political initiative once they take over the leadership. In their absence in IPOD summits, FDC has always cited the lack of a leveled political playing field and stuffing of opposition activities (by the ruling government) as the justification.

However, FDC leaders maintain that they are ready and willing to take up IPOD leadership. They accused DP of hatching plans to deny them IPOD leadership which is rotational.

The ping pong between the two parties has since caused a stalemate raising strong concern at the IPOD secretariat.

In a bid to allay the fears of IPOD Secretariat, Mao has written to IPOD Executive Secretary, Frank Rusa identifying a number of steps that he has taken to ensure the situation returns to normal.

“I am pleased to inform you that as announced after the end of the term of the Democratic Party at the helm of IPOD, I have been carrying out consultations with stakeholders. I also held a very fruitful meeting on the subject of IPOD leadership with Amb. Wasswa Birigwa, the FDC National Chairman,” Mao said in the letter.

The DP boss noted that the purpose of the consultations was to realign IPOD members to the goals of the organisation following the fall-outs around the previous two summit meetings.

“I have resolved to undertake this because the concerns raised about the FDC’s toxic behavior and utterances is a matter which has to be resolved by the top leaders of the IPOD membership. Unfortunately, subordinate officers and spokespersons have continued to foul the atmosphere making cordial deliberations difficult,” Mao said.

Mao explained that IPOD was set up to facilitate dialogue but by the look of things, the organization is failing to even resolve a matter of attitude of one member.

“If we can’t even resolve a matter such as the attitude of one member towards one another then surely we will not be able to tackle the teething problems that bedevil our country,” Mao noted.

Mao however expressed readiness to further engage the concerned members assuring the IPOD Executive Secretary that he will be holding talks with his FDC counterpart, Patrick Amuriat within a few days and will report back on the way forward. 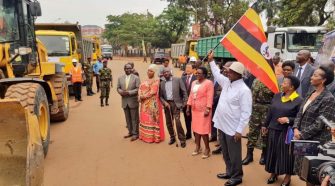