Isingiro district Chairman, Jeremiah Birungi Kamurali has said the criminal charges he is facing are being concocted by Bukanga county MP, Steven Kangwagye with an aim to fail his bid for the Parliamentary seat come 2021.

According to Kamurali, the accusations began when he announced his 2021 bid for the Bukanga Parliamentary seat, in November last year.

“You are aware that next year, we are going to have NRM primaries, so time is against him. That’s why he [Kangwagye] decided to speed up the court process to have me convicted such that he can have victory [in 2021] without any impediment,” Kamurali told reporters during a news conference in Mbarara on Monday.

“I want to extend my annoyance towards the manner in which my political opponent has taken political issues by using his capacity as a Member of Parliament to accuse me of criminality,” he said.

He said court is yet to summon him to answer 7 charges that include; assault, unlawful use of motor vehicle, theft of slot machines, malicious damage, theft of a censor motion, criminal trespass and opening livestock markets forcefully, all allegedly slapped on him by the Bukanga MP.

He says that some of the said offences emanate from the implementation of resolutions taken by the district council. Kamurali says that in effecting the resolutions, he was working for the people of Isingiro who voted him into power.

“For example the issue of opening livestock markets, people were being cheated, others almost died of hunger. You are all aware that Isingiro was hit by terrible famine in 2017, so, some of my actions were to benefit the people I represent,” he explained.

In 2017, Kamurali ordered for the reopening of the livestock markets despite reports that there was an outbreak of Foot and Mouth Disease (FMD) in Isingiro. He said at the time that talk about FMD and calls to maintain a quarantine were being advanced by a few deep-pocketed individuals (majorly leaders) who were benefiting from the closure of livestock markets at the expense of the local livestock traders.

Similarly, he said on Monday that the case regarding slot machines followed a resolution by the district council  to ban the gambling machines.

“Police has previously summoned me over the same charges but they have always found no case for me to answer”.

Kamurali claims that Kangwagye is using State powers to coerce the Director of Public Prosecution (DPP) in Kampala to file trumped-up charges against him.

“Because he is a member of the first family, Hon Steven Kangwagye is exploiting the available mechanisms to fail any opponent against him,” he said.

He alleges that Kangwagye moves with soldiers in the night tearing and burning his election posters in Bukanga.

He appealed to his opponent to allow democracy to prevail, asking that the political ground be levelled for a fair electoral race.

“He will not make it. He can only disorganize me to have me arrested and charged, but that cannot stop me from standing”.

“Legally, I am protected, but I must let the public know that I am being witch-hunted, persecuted politically by the so-called member of the first family who fears I will unseat him”. 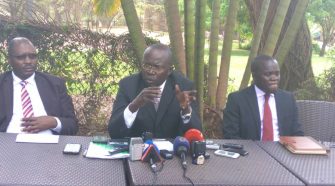