In his latest jab against the West, Uganda’s President Yoweri Museveni has said it would be treasonous for Gen Kale Kayihura to have investments in the U.S. given that it was the labour of enslaved Africans that got America to the advanced economy it has become.

The President slammed the U.S. while responding to the recent decision by the Donald Trump administration to slap sanctions against Gen Kale Kayihura.

The U.S. Department of State in a statement over a week ago publicly designated Kale Kayihura under Section 7031(c) of the FY 2019 Department of State, Foreign Operations, and Related Programs Appropriations Act, “due to his involvement in gross violations of human rights”.

“Specifically, the Department has credible information that Kayihura was involved in torture and/or cruel, inhuman, or degrading treatment or punishment, through command responsibility of the Flying Squad, a specialized unit of the Uganda Police Force that reported directly to Kayihura, ” read the statement.

Through an Executive Order, President Trump authorized the Secretary of the Treasury and the Secretary of State to impose economic sanctions and visa restrictions, respectively, on persons determined, among other things, to be responsible for or complicit in, or to have directly or indirectly engaged in, serious human rights abuse or corruption.

The economic sanctions against the General include seizing any properties that he owns in the U.S.

The U.S Department of Treasury’s Office of Foreign Assets Control (OFAC) said “all property and interests in property of Gen Kayihura, and of any entities that are owned, directly or indirectly, 50 percent or more by him alone or with other designated persons, that are in the United States or in the possession or control of U.S. persons, are blocked and must be reported to OFAC”.

OFAC’s regulations generally prohibit all transactions by U.S. persons or within (or transiting) the United States that involve any property or interests in property of designated or otherwise blocked persons.

Responding to the sanctions on Sunday, President Museveni said he personally has no investments and would never have investments in the U.S.

He added that it would be disappointing to hear that Kale Kayihura had investments in the USA that his children go to see.

“That would be treason. Investments in the USA when Uganda needs investments? I do not have and will never have a single investment outside Uganda; possibly, for some sentimental reasons, I could consider investing in Tanzania, Kenya, Rwanda etc. – African countries”.

Museveni says it is “inexcusable” that at a time when Africa is still struggling to stand up, still with deficits in many areas, “that the African elite would transfer money, again, to the West”.

He says that Africa has not become strong enough as yet to assist Europe and the USA with aid.

“On my part, the only time I opened a bank account outside Uganda, was in a Bank in Gothenburg, Sweden, where I deposited the US $ 120,000 that was donated to the NRM by the Late Max Rohrer of Roko. Elizabeth Bagaya also brought US $ 100,000 from Abiola. I do not remember whether I deposited it there also. This was in 1985”.

Otherwise, it is sacrilege for Africans to continue to contribute to the welfare of others to Africa’s detriment, he said. 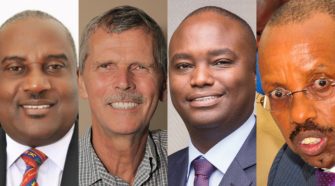