Uganda is gearing up to mark 500 years since the occurrence of the Biharwe Eclipse on Biharwe Hill near Mbarara town in Western Uganda.

According to a local legend, hundreds of years ago, in a time when a number of small kingdoms were at war with each other, King Rwitamahanga Olimi I was carrying his spoils over Biharwe Hill through Nkore from Rwanda, when a strange thing happened.

The skies darkened unnaturally, which the King took as a sign that the spirits of those they had killed in the war had returned to exact their revenge. King Olimi and his troops abandoned their loot, including cattle, food, and concubines there at the hilltop, fleeing the unnatural shadow. The locals were able to collect the discarded spoils, calling their haul “Enduga Mwiguru” literally translated as cattle from heaven.

The legend further indicates that the King of Bunyoro could not go back home empty handed, so he chose to invade the young king of Buganda Kingdom under another warrior king Nakibinge killing him together with his distinguished Commander Kibuuka.

Whereas the story may or may not be entirely true, the eclipse itself certainly occurred and space scientists together with U.S NASA have since established that the Biharwe Eclipse took place on April 17, 1520 AD. As such April 17 this year will mark 500 years since the eclipse appeared.

Due to its cultural and historical importance, a monument to commemorate its occurrence, which has come to be known as 1520 AD Biharwe Eclipse Monument, was erected in 2014 near the Igongo Cultural Center and Country Hotel whose Executive Director is James Tumusiime, also one of the brains behind developing the site, at an event presided over by President Yoweri Museveni.

The monument stands on 3 pillars representing the three realms and kings of Buganda, Nkore and Bunyoro at the time. On the top part sits a yellow Eclipse-like feature and the surface is covered by different pictorials, symbols, Egyptians writings as well as a number of features from different regions that include spears, drums and shields.

Initially, only the monument existed on the hill and huge numbers of the local residents would storm it for prayers in anticipation of getting healed in case of problems and sickness, but using Shs150m funding from United Nations Development Programme (UNDP) last year, the site was improved by fencing the hilltop as well as designing it to meet international standards including creation of a campsite and a public pavilion.

Last week, the refurbished Biharwe Eclipse Monument was unveiled to the media, at an event that was also attended by UNDP Resident Representative for Uganda, Elsie G. Attafuah and Rose Nkaale Mwanja, the Commissioner Museums and monuments Ministry Tourism, Wildlife and Antiquities who represented Minister Tom Butime.

Tumusiime who appreciated UNDP for the support in improving the site, noted that Biharwe Eclipse Monument is vital in telling the interrelated cultural and political history of the three kingdoms.

“On the 17th of April, 2020, it will be 500 years since this eclipse took place. In Africa, we don’t have many places we talk about which are beyond the colonial period. I think the nearest we have are the coastal towns like Mombasa where the Arab traders had built, but other than that, we don’t have anything that is beyond 1700 AD when the Arabs started coming here but this site is remembered for what happened here 500 years ago and we thought that, is a very important landmark that the entire world should know and appreciate,” said Tumusiime.

“It is important because the cultural and political fabric of Uganda is based on the type of leadership we used to have in the past. Kingdoms may no longer be so important now, but previously they were the most important centers of political, religious, social and economic authority. Gradually, modern democracy has displaced them but they are still regarded highly”

“The fact that 500 years ago, something affected three kingdoms in the area, we thought we could have that in our history to help our imagination – how were people living, who fought the other, etc. It is not so much of who won and lost but the fact that these kingdoms existed, is the nucleus of the evolution of Uganda,” he added.

Tumusiime said the launch was also aimed at authenticating the Biharwe Eclipse so as to help individuals who still had doubts of its existence, to appreciate it.

“We wanted to authenticate it because some people were asking “how come we didn’t study about it in schools?”, you are studying the American war of independence, genocide in Germany, slave trade, the coming of Christianity, but not studying about ourselves, that is why you don’t know it. Recently, the President wanted a particular book and we had to get one of the authors, a professor from the US, when he came, he told the President how they studied the Biharwe Eclipse and used it as a measure of authenticating history and working out bechmarks and calculating years after,” said Tumusiime.

On her part, Claire Mugabi the marketing manager Uganda Tourism Board (UTB) who represented its CEO, Lilly Ajarova, heaped praise on Tumusiime for curating the events surrounding Biharwe Eclipse, saying the board is excited to add the monument to a long list of tourism products in the country.

She commended him for his continued effort in curating not only the story around the site but also, improving cultural tourism offering in Uganda. She further hailed UNDP and other development partners that have worked Igongo cultural centre to both preserve and immortalise the eclipse occurance as well as developing it into a tourism product for the present and future generations.

This, she says, has given them confidence as the tourism board, to happily add the Biharwe Eclipse Monument to Uganda’s tourism portfolio and selling it as one of the tourism products of the country.

“As UTB, we are deeply aware of the significance of this cultural and heritage site both as a stand alone project, but also, as a significant add-on to the tourism experience that is going to provided as people move along this route to come and experience other products. So, we are very positive that we are going to improve the experience when they come to visit this site,” Mugabi said.

Rose Nkaale Mwanja, the Commissioner Museums and monuments in the Ministry Tourism, Wildlife and Antiquities who represented Minister Tom Butime expressed pleasure and optimism that the area is headed for further growth accruing from the development of Biharwe Eclipse Monument.

“The services are going to improve in the area, the knowledge by the different schools institutions – further research is now going to be done and so, this is very good for the development of the area and the country,” Mwanja said.

“We as government are happy with the initiative by private individuals and are supportive. Government as a state party, has received a request from UNESCO about this hill. We have read some of the literature and we pledge as a ministry that we shall prepare the dossier and summit this request further for promotion to UNESCO for nomination as a world heritage site, which will mean that it is heritage for humanity,” she added.

On her part, the UNDP Resident Representative for Uganda, Elsie G. Attafuah noted that sites like the Biharwe Eclipse Monument help Africans to tell their own story without distortions.

“It helps us to tell our story in a very compelling way. In most times, others tell us our story and when they do so, they look at it through their lens. It is high time we told our story, rebrand ourselves and position ourselves in the International development sector,” Attafuah said.

She appealed to players in the tourism sector to continue working on developing the sector by identifying new tourism products since tourism is now key in the country’s economic development.

“The 2030 agenda, the global blueprint for development recognises the potential of tourism in contributing to job creation, GDP and many other things. Tourism is therefore no longer a choice or luxury but a necessity for development, an engine of growth and a catalyst for structural transformation that Uganda needs to generate jobs and economic opportunities for its populace,” she said.

“As we launch this eclipse monument in the coming days, I urge us all to reflect on how we can harness the power of tourism to generate quality jobs for durable growth, reduce poverty and offer incentives for sustainable growth and environmental conservation,” she added.

Meanwhile, President Yoweri Museveni is on April 17, 2020 expected to preside over the event that will mark 500 years since the occurrence of the Biharwe Eclipse. 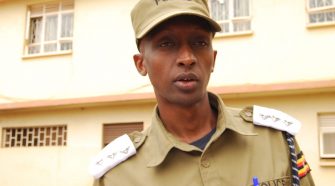