The ICT Minister, Frank Tumwebaze has asked Ugandans to be committed and contribute to the country’s development as government holds its ground on the social media tax.

Tumwebaze who was Tuesday responding to queries from the press regarding the recently introduced tax on the access of social media platforms wondered why Ugandans are choosing evasion of this tax over building their country.

With effect from July 1 this year, government effected a law that requires Ugandans using social networking sites like Facebook, WhatsApp, Skype, Twitter and the others to pay a daily levy of Shs 200 (US cents 0.05).

On Tuesday, the State Minister for Planning, David Bahati said that unlike changes that have been made in the taxes on Mobile money transactions, the tax on access to social media still stands.

“OTT (Over the Top services), we have maintained the Shs 200 for access. We are working to ensure modalities of paying it are convenient to users,” Minister Bahati said.

During the news conference, journalists asked the ICT Minister to respond to the measures that government was putting in place to block Ugandans who are avoiding the tax by using Virtual Private Networks (VPNs).

Some social media enthusiasts have since the introduction of the Shs 200 tax on Over The Top services resorted to use of VPNs which by design bypass local internet access limitations. The argument for some is that they rather pay for using VPN than paying taxes whose benefits they don’t see.

“Whether UCC succeeds in blocking VPN or not, I am not very enthusiastic about blocking. But ask yourself how much money you are spending in terms of data for you to download VPN in order to enable you to get bypass capacity,” Minister Tumwebaze said.

“If you are a committed Ugandan who really wants services from your government why are you motivated and proud with your head high to contribute money 30 times the OTT tax to the innovator of VPN?” he asked.

Tumwebaze noted that the low domestic revenue has pushed Uganda to rely on foreign aid resulting into increasing debt burden. He said it is illogical for the same Ugandans who criticize government for borrowing to reject taxes aimed at developing the country.

“When Ministry of Finance is borrowing, we, the Parliament and civil society are grilling them for borrowing. But when we say this is a sector that has grown in the economy so let’s get a bit of it, let’s get Shs 6,000 from every holder of a smartphone consuming OTTs, what production capacity will it stiffle?”

“Is USD 1.4 too much for a citizen to contribute to tax yet you have money to buy a smartphone, minimumly at Shs 300,000 that is data enabled, and you load bundles of over Shs 30,000? Logically you don’t make sense”.

It is estimated that 10 million Ugandans use social media. Government expects to generate 284 billion from the levy on social media access, according to Minister Bahati.

But the logical strategy, according to the ICT Minister should be to extend the optic fibre to the remote areas of the country to enable more Ugandans and schools access the internet. This, he said is what the revenue from the OTT tax will be utilized for.

Tumwebaze urged the media to be moderators of the debate rather than take sides. 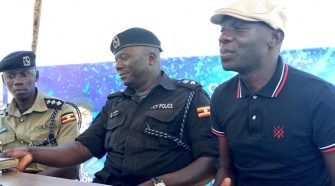