Former Blu*3 singer, Jackie Chandiru has denied rumours that have been making rounds that the abuse of drugs like stimulants was the cause of her health problems.

Chandiru, known for songs like Gold Digger, Agassi and Overdose among others has been off the music scene for a while now. Twice, she was checked into a rehab and admitted there. Photos of a slim looking Chandiru later emerged, causing many to speculate what had happened to the once very popular songstress.

Media repeatedly reported that she had been in rehab due to her abuse of drugs and substances.

But on Thursday, while appearing on NBS TV’s ‘Uncut’, she denied having abused drugs, saying she was only addicted to a prescription drug that she had been using for her back problem.

“I had back pain and visited a doctor who prescribed a strong drug to help me get rid of the pain. It was strong and had become addicted to it that in the long run it affected my health but I have never been on drugs like cocaine, marijuana or the likes,” she said.

The ‘Overdose’ singer said she struggled with addiction and that at some point, she could not eat, but only relied on the prescribed drug.

“The drugs got me to a dark place in my life. I could no longer socialize with my friends, i could no longer write music and this led to me being hospitalized for sometime”.

She also delved into her terrible divorce with ex-husband, Nol Van Vliet, which she said stemmed from her addiction situation.

“He was very supportive at first, but when I again relapsed and was taken back to rehab, he was disappointed that I had become addicted again,” she said.

The singer said she at some point thought she was days away from dying, especially given the weight she had lost.

Chandiru said she got to a point where she reflected on her life, the friends and successes she had made in life, and realized she was not going to let addiction waste her life.

But friends have been very central in her recovery process, she said, and that whenever she gets tempted to use the drug again, she talks to friends who give her counsel.

Chandiru also recounted on the news of Mowzey Radio’s death early last year, which she said was shocking. She said she and Radio we’re close friends given that she had helped him in woowing her singing partner, Lillian Mbabazi.

“When he heard I was in rehab and I had a problem, he offered to help. He always came to visit me. About a week before his death, he had visited me with Weasel and Chagga”.

Regarding music, she said it would be good if she and the other two former members of Blu*3; Lilian and Cidy teamed up again.

“I think it will be great if me and the girls got back together. We’ve gained experience as solo artistes and putting all that together would be simply amazing”. 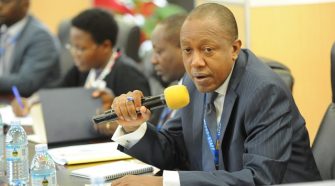