Former Member of Parliament for Terego county, Kassiano Wadri has been declared the duly elected MP for Arua municipality.

Wadri was announced as the winner in the by-election held on Wednesday after he polled 6,421 votes ahead of his closest challenger, Nusura Tiperu of the ruling NRM who got 4,798 votes. He took lead with a difference 1,623 votes.

The official results were revealed by Ruth Angom, the Arua District Returning Officer at 9:56pm on Wednesday, at Arua Public School where the tally centre was stationed.

Kassiano Wadri was standing as an independent candidate.

“Accordingly, as the returning officer for Arua electoral district, and in accordance with Section 53, sub-section 1 of the Parliamentary Elections Act 2005 as amended, i declare Wadri Kassiano who has obtained the largest number of votes, to be the elected candidate for Arua municipality constituency,” said the District Returning Officer.

The announcement was met with cheers and applause from some of the supporters of Kassiano Wadri who were present at the tally centre.

Unfortunately, the victor in the race was not present to witness the announcement, neither did he manage to cast his ballot earlier in the day, as he is incarcerated in Gulu district.

Wadri together with his other supporters including Kyadondo East MP, Robert Kyagulanyi (Bobi Wine) were arrested in connection with the the attack on the convoy of President Yoweri Museveni on the last day of campaigns.

Police said that his supporters pelted stones at the motorcade of the President and smashed the rear window glass of one of the vehicles.

They are due to be to be formally charged in court on Thursday in Gulu.

“This is a very unfortunate day. The candidate [Wadri] has not been able to vote for himself because he has been incarcerated for the reasons we know,” Kabweri county MP, Francis Gonahasa, a member of the opposition coalition that backed Wadri said, moments after the declaration of his candidate’s victory.

“I want to congratulate the people of Arua and the team that has worked tirelessly with Wadri. Together, opposition parties will change this country,” Gobahasa added.

He said that the win was an indication that Yasin Kawuma, the driver to Bobi Wine who was shot and killed on Monday during the chaos in Arua did not die in vain.

On his part, Democratic Party (DP) national coordinator, Samuel Lubega said that Kassiano Wadri’s win was a win against the dictatorship.

The Arua municipality by-election was not only highly competitive, but it also left the opposition further divided, with some of the key members of the strongest opposition party, FDC opting to support Wadri over the FDC candidate.

While overall, the polling day was calm and peaceful, there were pockets of allegations of malpractice including one incident where a man was beaten by locals for allegedly being in possession of voter registers.

The Arua municipality Parliamentary seat fell vacant in June this year following the assassination of the former MP, Ibrahim Abiriga. 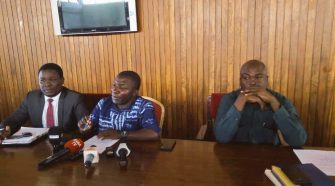