Bobi Wine who doubles as the Member of Parliament for Kyadondo East has for the last few weeks been on a visit in Jamaica. He traveled to Jamaica where he performed at the Rebel Salute festival. The two-day music fest which brought together 65 reggae and dancehall artistes was held at Grizzly’s Plantation Cove, Priory St. Ann.

From Jamaica, the Kyarenga singer proceeded to the U.S where he later met with popular American civil rights campaigner and political activist, Rev Jesse Jackson.

“It was an absolute honor and pleasure to meet with and hold a discussion with @RevJJackson, a towering leader of the Civil Rights Movement in the United States, who worked very closely with Dr. Martin Luther King Jr in the fight against injustice, poverty and discrimination,” Bobi Wine wrote on Twitter after posting a photo of him interacting with the Reverend who has been named “Conscience of the Nation” and “the Great Unifier,” for his role in pushing for empowerment, peace, civil rights, gender equality, and economic and social justice.

Bobi Wine added “I told him how we are encouraged by their example to soldier on daily, through trials & tribulations, in our quest for freedom, justice & equal opportunity. It was humbling & uplifting to pray with him, for our country Uganda & the continent of Africa. Such a historic encounter”.

The ‘People Power’ figure who has in the recent past doubled down on his criticism of President Yoweri Museveni’s government, later posed at a statue of Dr Martin Luther King, another American civil rights figure.

On Thursday, Mr Vegas, 44, whose music career spans over two decades took to his Twitter to praise Bobi Wine’s sacrifice. He lauded the Ugandan Afropop singer for not choosing to watch on as Ugandans suffer.

He then promised he would campaign for Bobi Wine.

“I will come and campaign for you when you are ready bro! Africa Stand Up! This is the future! I met this man! He could have stuck to his music & watch our people suffering continue. The sacrifice is real”.

Although there is speculation that Bobi Wine, 36, intends to run for President come 2021, the singer and legislator has remained hesitant on revealing whether or not he will join the race. 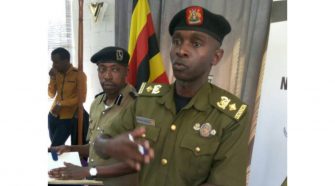