The Minister for Education and Sports, Janet Museveni has said that no private school will be allowed to operate in 2019, without being registered by the Ministry.

She gave the directive in her remarks shortly before releasing the 2018 Primary Leaving Examinations (PLE) at the Office of the Prime Minister, in Kampala on Thursday.

The Minister was responding to earlier remarks by the Uganda National Examinations Board (UNEB) Chairperson, Mary Okwakol who reported that some schools that are not registered by the Ministry of Education and Sports continue to operate and dupe parents and learners which consequently make learners miss sitting final examinations.

The Minister said unregistered schools cause a lot of pain to learners and parents when they don’t sit for their final examinations as well as causing financial loss to them. She further appealed to political leaders to support the Ministry, in putting an end to the problem.

“It is regrettable that some learners missed the examination because they discovered too late that they had not been registered despite their parents having paid registration fees. It is also regrettable that some of the schools where these learners were learning from were unregistered and where therefore, unknown by the Ministry of Education and also to UNEB,’’ she said.

‘’As you all know, my Ministry has worked so hard to close these illegal schools and I hope that everybody really supports us in this endeavour, not to allow teachers to start now operating in residential houses as schools and then, at exams time, they leave the children on their own to suffer the consequences,’’ she added.

She further said that some of the schools the Ministry closed continued operating with the full knowledge of the local authorities.

The Ministry has already issued a reminder to all relevant authorities that no private school will be allowed to operate during the 2019 school year without a valid licence issued by the Ministry, she said.

“I appeal very strongly to the leaders to support this Ministry. This Ministry is everybody’s ministry. We are just servants of everybody in the area of education, so we appeal to everybody to really give us the support they can so that we give valuable education to our children,’’ she added.

She said that closed schools should only be allowed to operate again, after meeting all the set minimum requirements for the learning, teaching process and the legal status to operate.

The Minister implored political leaders to help in sensitizing parents on the type of schools they should enroll their children in.

The issue of candidates failing to sit examinations due to the status of their (unregistered) schools has been perennial. This bears high financial and time implications on both the pupils and the parents since the candidate would have to waste another year to sit PLE. It remains to be seen how far the pronouncement by the Minister will go in curbing the problem. 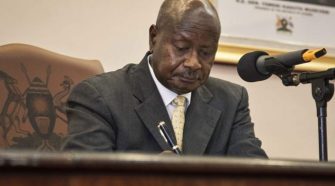