According to Dr. Kohei Makita, a Professor of Veterinary Epidemiology at Rakuno Gakuen University, the agency designed a number of intervention packages through the Japanese government to boost milk production in Uganda.

These include; sensitization and guiding dairy farmers, upscaling milk hygiene, nutrition for the reproduction of animals and tick-borne disease control measures.

He revealed this while addressing livestock farmers and district leaders in a meeting held over the weekend at the Mbarara district council.

Dr  Makita said in three years implementation of the project the Japanese staff together with the extension workers in the district helped farmers on how to construct crushes and make hay to produce clean and safe milk with concluded end line survey that reduced mastitis and East Coast fever which used to affect milk production in the district.

He however stated that with the improved livestock measures, the district has tremendously increased milk production thus losing better prices of milk, especially among the farmers.

Recently during the President’s tour in the Ankole region, the same issue of milk prices was raised.

The President pointed out that the world market is the determinant of milk prices and this government has no way of addressing the problem when different countries are supplying it at different prices.

He explained to farmers that in the event that Uganda chooses to increase price of milk, the international consumers could opt for milk from other markets that are selling it cheaply.

According to the District Veterinary Officer Mbarara, Dr. William Mwebembezi, Mbarara and Rwampara livestock farmers are now producing a total of 580,000 liters of milk daily compared to 410,000 liters in previous years.

He attributed the increased milk production to the safe milk promotion project that was facilitated by the Japan International Cooperation Agency (JICA).

Dr. Mwebembezi says that factories involved in processing technologies only consume 30 percent, 10 percent remains in households that produce the milk while the remaining percentage ends in informal trade (milk vendors and hotels).

Dr. Joseph Byaruhanga who was the project consultant in Safe Milk Promotion insisted that the government and development partners in the milk industry should determine milk prices on quality as an incentive to encourage the farmers to continue producing good quality milk.

“Even if the project has closed but there are some things still affecting farmers especially on price of milk where government and farmers need to answer the paradox where a liter of milk is costing less than half a liter of water.”

At the closing ceremony, Mbarara district veterinary office received a stereo microscope valued at USD 5,000 (Shs 19m) that will be helping veterinary officers in identifying the type of ticks on the farm and give direction on the acaricides to administer to strategically control the ticks.

Farmers who excelled in demonstration farms were also awarded prizes. These included; Kabakyenga farm (best for nutrition and reproduction), Nuwagira Geoffrey farm of Rwenjeru in Biharwe division got a prize for hygiene, and the Consortium farm was the best in tick control. 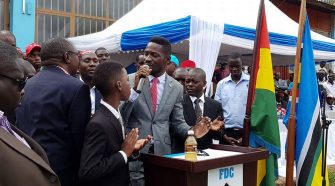