Scotch whisky brand, Johnnie Walker has thrown its weight behind the Young Achievers Award franchise with a Shs 80 million sponsorship announced on Thursday.

Johnnie Walker was announced as the official sponsor of the annual Awards which celebrate achievements of the youthful Ugandans that have excelled in different fields and driven change in communities.

The Awards now in their 7th year are organized by Reach a Hand Uganda, a youth led not for profit organization focused on youth empowerment programs.

Speaking at a press event at Kampala Serena Hotel yesterday, Roger Agamba, the International Premium Spirits Brand Manager at Uganda Breweries Ltd said that for the Awards to have made it to seven years is no mean fit.

This, he said, is the reason that Johnnie Walker was moved to associate with the Awards which “have changed people’s lives and opened doors”.

“These Awards are inspiring the next generation and this is what inspires us as Johnnie Walker. This ties with our campaign ‘Keep Uganda Walking’,” Agamba said.

The Awards are slated for August 18 at Kampala Serena Hotel the same week when the International Youth Day will be marked.

This year’s edition will recognize 10 most outstanding young people in the categories of; Social Entrepreneurship, Business, ICT and innovation, Sports Personality, Media and Journalism, Farming and Agro processing, Performing Arts, Fashion, as well as Film and Photography.

Also to be awarded will be the Young Achiever of the Year, Young Hero/Heroine of the Year and Lifetime Achiever.

Criteria is based on the idea, the uniqueness of the idea, its impact to society as well as whether the particular individual is the founder and whether he/she is between the age of 18 to 35.

Winners will be sieved by a panel of over 16 judges.

Ibrahim Batambuze, the Communications Manager at Reach a Hand Uganda (RAHU) said that beyond recognizing these individuals, RAHU has been able to connect them to further opportunities such as funding and scholarships.

Last year’s winners got seed funding from government through the Ministry of Trade worth Shs 45m as a whole.

“This year, we have set up contacts and we are going to link the finalists to different collaborators and potential funders so that they get opportunities to scale up their ideas,” Batambuze told reporters.

He said that in the long term, RAHU seeks to focus on comprehensive empowerment of the youth in Uganda so as to contribute to the development of the country since the young make up the majority of the population. Batambuze also said they plan to scale the Awards fellowship beyond Uganda to other countries in the region.

IN PICTURES: Here’s What You Missed at the Girls’ Festival 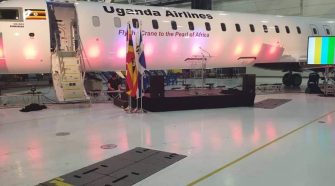