The position fell vacant when the elected Woman Member of Parliament, Rose Lilly Akello opted to contest in Karenga, a new district carved out of Kaabong on July 1, 2019.

Without giving further reasons, in a notice to the district returning officer, Adyaka who was nominated on August 28 asked the Electoral Commission to struck her name off the list of contestants for the post.

“This notice is hereby made to unequivocally withdraw my candidature from the race and i don’t intend to contest in the aforementioned position and that my name should be struck off the names of the nominated candidates to contest for the position of Kaabong woman MP,” her notice dated September 9 reads in parts.

However, FDC has Sunday through the party Secretary General, Nandala Mafabi written to the Kaabong District Returning Officer threatening to drag the Electoral Commission to court and have it compensate the party, should Adyaka’s withdrawal be upheld.

“This candidate was sponsored by FDC party under Section 10 of the Parliament Election Act, 2010. Therefore, Section 19(2) and (3) cannot be applied in isolation. Note, we are under multiparty dispensation,” writes Nandala.

“As a party, we object to her withdraw. The party can nominate a candidate in absence and carry out campaigns without a candidate. Ref to Dr Kizza Besigye case of 2006,” he adds.

He further vows that: “Should the electoral commission go ahead with this, then they should be prepared to compensate FDC party with over Two Hundred Million shillings.” 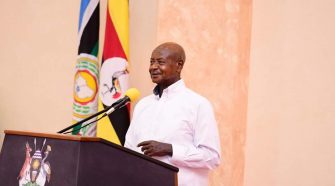 Museveni’s Address Has Been Reinstated to Monday Night – State House